For many of us, we simply wait for the utility bill to show up, and never give it a second thought unless something just does not seem right. Now all of a sudden we are staring at this bill and we start asking questions like, did they read the meter right, do I have a leak, is someone stealing electricity, who, what, when, where, & how much again? In the next few articles, we are going to give you a basic primer on reading the four main types of meters in use today & a few helpful tips for possibly troubleshooting that dreaded “this just can’t be right…”

There are two main types of measurements used to measure water usage which is either by the gallon, or by the cubic foot. While one could assume that measuring by the cubic foot would only apply to large commercial customers, one would be wrong as it is basically decided by the water company which type they will use. In some cases, they might not have a choice, due to their billing systems &/or all the old meters still in use happen to be a certain type. 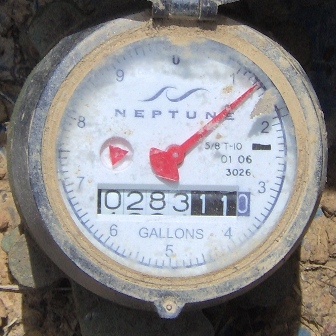 In my case, our local water company utilizes one that measure water usage by the gallon and bills us based per 1000 gallons. Therefore, by looking at my meter above, you can see we have used 283,110 gallons since moving here and if they were to read our meter when this was taken, the bill would show 283 as our meter reading.

A closer look at the meter:

The cubic foot meter is basically the same as the gallon meters, with the exception of the measurement and that they bill out at the 100 CF mark. A cubic foot of water contains 7.48 gallons, or as it is more commonly billed out at, 748 gallons per 100 Cubic Feet. Now one other interesting fact about this style of gauge is that the red needle will flip the last digit over when it hits .6 of a cubic foot. So based on the picture above – the actual reading is 2425.9 and as soon as it passes the 0 at the top, it will truly be 2426.X.

An oldie but goodie:

First, If anyone still has one of these in use, I would love to a picture of it as it has been at least 25 years since I have seen one like that. While I have not seen one though, I did include it as some locations still have not updated either infrastructure and there are rumors they are still in use. Just like the older style electric meters, you read it from left to right or clockwise, paying close attention to the fact that every other hand actually moves counterclockwise (it is a gearing & reduction issue). To read this meter or any like it, you begin with the largest dial (100,000 in this case) and read each dial down to the lowest one. If the hand is between numbers, you would use the lower number; in this case, you would read it as 806323 Cubic Feet.  For billing purposes, you would probably see 8063, as it is a cubic feet meter – if it were a gallon meter, your bill would show up as 806.

Using the meter to detect leaks:

As we mentioned above, most meters have a small red or blue arrow that spins as water moves past (low flow meter). The first test is to make sure anything that uses water is off like a shower, dishwasher, washing machines, etc… You would then simply walk down to the meter & see if there is any movement.

If there is no movement, you do not have a leak – if there is we need to start narrowing it down. One of the most notorious items is a toilet, so if you turn off those valves and the movement stops – you have found the cause. (Do not forget to turn the valves back on when you are done)

The second most common issue besides a leaky pipe inside the house (I am assuming you checked for dripping faucets & hose bibs already) is an underground leak. The easiest way to test for this is to see if your house has a secondary shutoff outside or maybe located just inside the house. If it does & you turn it off, it is time to cross your fingers & go check the meter again. If it has stopped you can stop worrying about digging up your yard, but now you have some investigating to do as the leak is somewhere between the fixtures & the shutoff.

One other issue you may wish to think about, is the under cabinet & outdoor Reverse Osmosis / Water Softener systems. You might want to make sure that no one uses the under cabinet one for an hour or so before testing (It take a while to process the water & for every gallon purified 3-8 gallons goes down the drain). For the Water softeners, just make sure it is not doing its cleaning cycle & you should be fine.

So what happens if you do not have a small arrow, or you think that it might be a really slow leak? The easiest thing in this case is to follow the steps above, place a sticker or mark at the location of the smallest measurement & walk away for an hour. If you have movement, you have a leak or someone forgot & washed their hands…

How about the new “Digital” Ones? 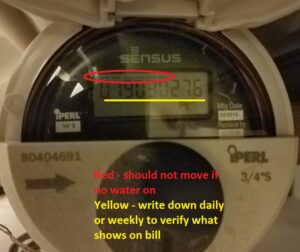 I can’t say I like them, but many of the above types will be phased out over time with newer digital versions. What isn’t there to like? Well the biggest item for me is trying to detect leaks as you now have a bar that goes across instead of the “wheel.” The issue is it won’t show real tiny leaks until they trip the next bar which could take quite a while. Some may also complain that their usage magically goes up. Well in this case it isn’t that their usage has really gone up, just that their old meter wasn’t showing all the water that was being used.