You are here: Home / Food Safety / The 4th of July, the BarBie, Smoked Lemonade & BBQ Etiquette?

July 4th, 1776 — We hold these truths to be self-evident, that all men are created equal, that they are endowed by their Creator with certain unalienable Rights, that among these are Life, Liberty and the Pursuit of the Perfect Barbeque… err Happiness… In all seriousness, before we get to the BBQ fun, 235 years ago those words above were penned & our great nation was born. While we can’t thank them today, we sure can thank all those that have or are currently serving which has allowed us to reach this milestone, so our hats are off to you, and heartfelt thanks from all of us.

Whereas Black Friday is a big day for retailers, they can’t even hold a candle to the sheer numbers of people that will be grilling or eating barbeque today. 71% of all American Households according to the HPBA will be cooking outdoors today, with Hamburgers & Steaks ranking the highest in favorite items. Also according to the HPBA, over 16 million new grills were sold in 2009 (last year data was available) and of the 82% of the population that owns a grill, 97% of them use it at least once a year.

BBQ around the world:

Yep, BarBie is Australian for Barbeque where they actually have coin operated grills available to the public. If you want to know how to throw a proper Australian BBQ, you might want to check out this – Step by Step Guide to the Great Aussie Barbie. Please note the official warning “Should you ignore my advice you may face the horrible experience known as the bad BBQ (singed hairlines, insufficient food, early run out of beverages, food poisoning, grumpy guests remarking ‘This BarBie is the pits, I’m goin’ down the pub’.)”

Oh Canada – our good friend Arne Salvesen (the recessed light guy) wrote an interesting piece on JB’s Building Moxie about not only the difference between grilling & barbeque, but was even nice enough to add in his Smoked lemonade recipe. Ok I dare someone to try it & let me know how it goes – I think I will stick with the Sweet Tea. In all seriousness, it is a great article & the only reason I am not trying it, is that I quite simply don’t like lemonade.

If you are curious about what other countries BBQ’s are like – there is a good break down on Wikipedia.

With all these new grills flying out the doors, more households cooking, it is occasionally helpful to remember the proper BBQ etiquette*.

*Unfortunately no one knows the true author of this little gem but it sure did make the rounds a few years ago. In all honesty I threw this in here as a reminder to have some fun & laugh a little, even if things don’t go perfectly during your cookout. More people (especially your kids) will remember the fun later & not a slightly burned hamburger or steak. Now if you have to order pizza because you turned the meat into a briquette, well that you will probably never live down, but hey, Life is Good.

Think you are good enough for a competition?

In closing – just remember, a true master can cook on anything, but sometimes it helps to intimidate the he11 out of your competition… 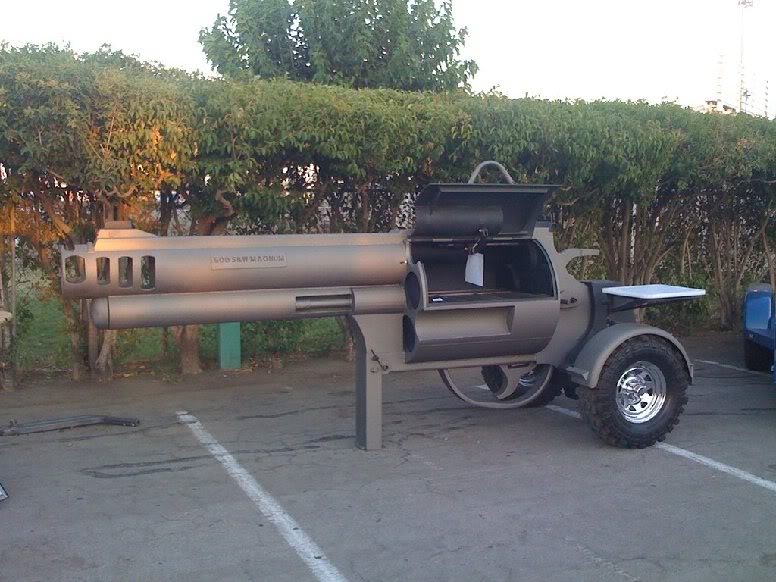 I would love to know whose grill this is, not only to give them the proper credit, but just to see it in person – to bad it also isn’t pulled the other way to make tailgater’s think twice. Happy 4th of July everyone