You are here: Home / Remodeling & Renovations / Estimating 101 – Trust but Verify 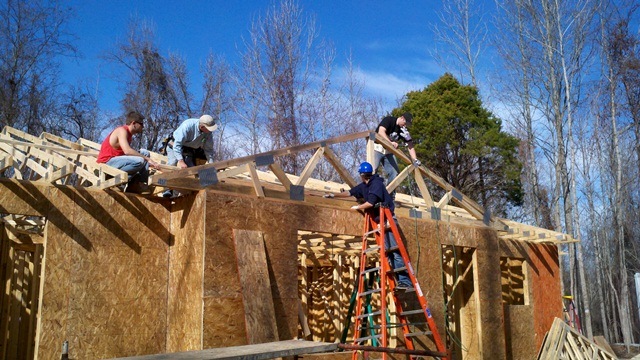 If there is one thing that throws many new construction companies for a loop (and even some more established companies), it is estimating. Just last week on one of the forums an owner was asking; who should eat this cost? The issue, he dropped a set of plans off for his supplier to estimate not only the price of the materials needed but the quantity. The issue as I recall was they were off by at least 4 squares (100 SF = 1 square), forgot ½ the vents & numerous other issues resulted in him doing the job at a loss.

While one might think that it is the suppliers fault or issue, they were covered with a little stamp & some fine print which said; hey while we do our best to be accurate, we are not liable if there is an error.  On the flip side of the coin a few weeks before that I was at another companies site & there was over a pallet of shingles (42 bundles to a pallet aka 14 squares) still sitting on the ground & the roof in question was essentially complete.  While one would hope that the supplier would take those shingles back, they might not be able to if they were special ordered. As many of us know, being just a bundle short can cost you 3x times the amount when you factor in materials & time, but having a ton extra costs can cost you as well.

So how might one avoid getting taken for a ride? The best advice come from Ronald Reagan who simply said that while one can trust, one should also verify. I know, for many of us who wear so many hats, just where do you find the time to do that? I essentially use the spot check approach. For example, I may look at the plans & count outlets in the case of an electrician. If the code requires at least 30 & they only have 25 listed, well then we need some clarification & I will send it back to them asking them to recheck the numbers & remind which code we are using. For roofing & other materials, I will typically check the square count, & look at the numbers for a few other items – if those look good it is probably good to go. If one or two items then I know I need to tear into it more &/or double check my counts.

You want what, by when??? Thanksgiving, Christmas, Beating Ole Man Winter
Tools of the Trade - Estimating with XactWare
Basic Bathroom Questionnaire
Remodeling your Bathroom: Going Green – Why?
Universal Design Principles – it’s better than you think
When should you call a professional deck builder?
Re-piping Your House: The PEX Solution
Deck Re-Skin Completed
Tweet