You are here: Home / Miscellaneous Articles / My Take: Profoundly Disconnected, the Industry, & Me? 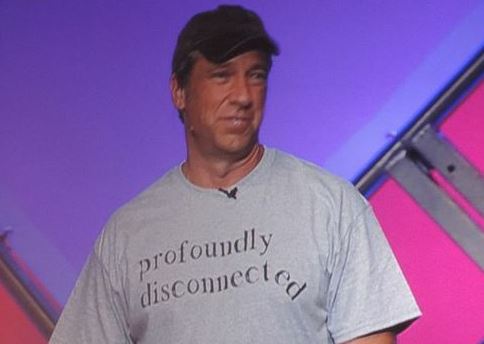 A little over a week ago, Mike Rowe was the keynote speaker (if your pressed for time – scroll to 14:35) at the Skills USA Opening Ceremonies. It is a pretty good talk about the Skills gap, 3 million unfilled jobs, why this is the greatest country, and his new project to help solve this which is called Profoundly Disconnected. (2013 HTRC Recap)

I have never really liked the term work smart NOT hard as most people seemingly forget that no matter what you are doing, hard work is generally involved & required. I have always turned it around to Work Smarter not Harder, as the opposite is also true in many cases, they fail to think ahead, make life harder than it has to be, etc… As brought out in the keynote one needs to first off learn what they need to do, master it, & work their butts off if they wish to truly succeed. 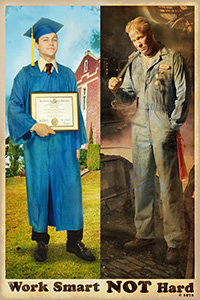 This is a picture of a poster similar to one used by colleges back in the late 70’s & early 80’s which was recreated. I love how they depict the college grad as happy and the poor old plumber, when in fact most of those that do work in the trades are generally better off financially & more happy then those that didn’t. Granted there are exceptions but I’ll touch on some of that below. 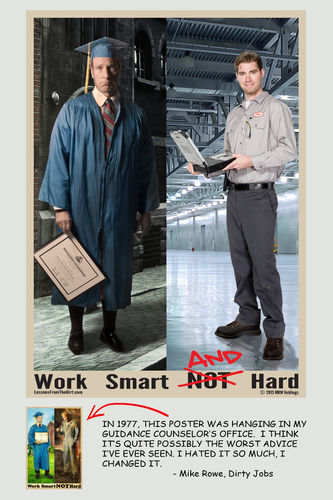 Below is the remake – Work Smart & Hard. Really anyone that has heard Mike speak or read his writings, well that is tough to beat so forgive me for simply punting… http://profoundlydisconnected.com/poster

Speaking of Disconnected: The NAHB 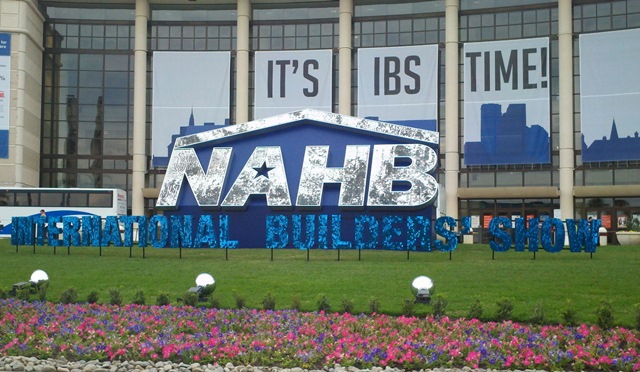 I remember going through the 80’s & 90’s where the term “global economy” basically meant buying Japanese goods, then the Chinese which both cost us numerous manufacturing jobs. If that wasn’t enough we soon started to outsource many jobs oversees to China & India. For some in the construction industry they just shook their heads & went, I’m not worried as they can’t outsource ours…

Nope, but we sure can seem to import lots of workers – now while I have no issues with legal immigrants, work visas, etc… I do have an issue with illegal workers & lets be perfectly frank – while many are great workers, there are bad conditions at home, etc… they are here illegally & those that hire them are also doing something illegal.

Unfortunately one of the biggest cheerleaders / enablers of this has been the NAHB. (Yes, there are other organizations to, but I don’t know them as well & would hate to name one unfairly) One would have thought they finally turned the corner (which is one reason I finally joined) with the last major contraction in the industry when so many of their members nearly did or did go under. Nah…

Has the NAHB lost it mind? They want me to call my US Senator and ask him/her to support ILLEGAL IMMGRANTS TO WORK IN THE HOME BUILDING INDUSTRY?

Too late… When it is time to renew your dues, I would refer you back to this thread to help you make your decision on should you or should you not. (SLS Side note – Nice timing by the NAHB on the initial request as my renewal paperwork & check that was going in the mail that day got shredded after seeing said “request.” This was more of the final straw after their Code Piece & what they are doing to this State’s Plan)

When I read this email from NAHB I thought I was in a deep coma having a bad dream. If this is what my dues are going to support I guess I will have to pull back after 30 years of membership….

Very quickly though the bigger issue came out “All valid points so far… I would like to know how many of us old-schoolers are training our replacements or have an apprentice in any trade?” Ahhh bingo

While it is easy to blame Congress, the NAHB, school counselors, the market, whomever… we are all in a way responsible not only for the mess, but fixing it. But how, the mess is so large…

One thing Mike & I do differ on is the complete high school & go to a trade school – I will give him that might be necessary in some of the trades, but in the construction industry is where a large percentage of not only top employees but also owners are high-school dropouts… (Please note, I am not saying drop out of high-school, but if you are willing to work hard, able to learn & master a skill, there are companies out there needing someone like you)

The biggest issue I see is we have stopped bringing in others & trained them up, instead turning to Craig’s List or other sites looking for that perfect candidate… Well you may get lucky, but the perfect candidate is generally not going to be found on those sites. As for the I can’t find motivated youngsters, well stop fishing where the carp are & go to where the bass are – you target customers, so must you target potential employees. Remember work hard & smart applies to every facet of what we do.

One other major issue, especially in Texas, Arizona, & other locals spread across the nation is that construction requires communication & when “No Hablo Español” means you can’t read the directions left or talk with anyone / can’t get hired, that pretty much clinches it for most & they will go elsewhere. I met a gentleman at my son’s graduation, completed the High School trades program & went into the military as a Mason/Framer – current career – Roadside Flag Holder. Yeah he is happy with his job, but…

It can be eye-opening when one steps back & looks at the their own business. I did this about a year ago which resulted in numerous changes being made… UPDATED: as they say life can come at you fast & much of what was written no longer applies so… What a Summer – Updates & Happenings

There’s no such thing as a free lunch – Roofing
Financing - Traditional Means
What to do about damage to your house during a storm
Construction Marketing Idea's: Best Construction Blog Contest
Going Green – While Cleaning
A Contractors Oversight Turns Into My First Big Project?
Evolving Landscapes: Women, Unions, & the Trades
New Year's Mailbag of FAQ's
Tweet