You are here: Home / Program's / Did Passive House US (PHIUS) just jump the shark?

For those that may not know, jumping the shark is a term to describe a pivotal moment when a television show begins to decline in quality. This term was originally coined when the Fonz jumped a shark in a Happy Days episode.

While the US version of Passive House is not a TV show (hereby to be called PHIUS), it sure has had it’s share of drama with it’s break from the original “Passiv Haus” to fights over should foam be allowed to be used, if at all. The latest is a complete rewriting of the standard which does away with the traditional .6 ACH, set limits on heating & cooling, etc… With that, let’s take a quick look at some the big changes & see what you think…

“15 kWH is dead” is a mantra of PHIUS & it clearly shows. Quite simply one had to ensure that a house didn’t use more than 15 kWh per SF (Passiv Haus had it broken down for heating & cooling per meter – PHIUS tried combining at first) to heat and cool which led to some interesting designs including a few builders using 17″ of sub slab insulation. While PHIUS was originally looking for a simple number that could apply to a large geographic area they arrived at this map below with now over 1000 different standards.

The hall mark trademark of Passiv Haus was that they were built really tight – while modern codes allows for 3 ACH or less in most parts of the US, Passiv Haus only allowed for .6 ACH which, while tough was doable. The new standard requires 2 air-tightness tests to be run and instead of being based on Air Changes it is based on allowable leakage through the envelope. At 50 Pascals .05 CFM & at 75 Pascals (based on military testing) 0.08 CFM are the max. This equates to .77 to just over 1 ACH depending on the design of ones house.

The stated purpose for doing this was to help eliminate the small house penalty and due to the simple fact that air leakage happens through the envelope, not in the middle of a room. With that they have virtually ensured that almost all PHIUS buildings will have stairs in them as it is easier to hit the more relaxed standards with two or three story houses. For example these are the numbers for a simple single story house (max CFM allowed & what the ACH would be) followed up by two stories. For More: PHIUS – ACH Conversion.pdf 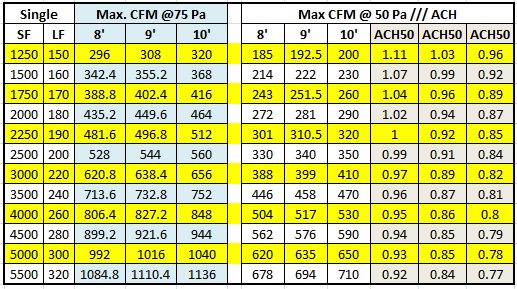 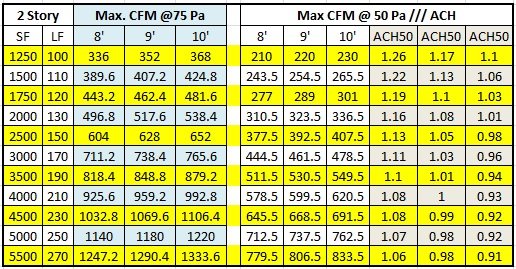 Per Person vs. Square Footage:

One of the other tweaks I see was under “The source energy limit was reconsidered on the basis of the global CO2 emission budget… Change to a per-person limit rather than per square foot of floor area, at least for residential projects. This follows the fair share principle and removes the penalty for those who seek to reduce their carbon footprint by building small homes.”

Interestingly I have seen quite a few people talk about actual number of occupants instead of the standard # of bedrooms +1 equaling the number of occupants. Not only does this contradict many established baselines (and where they will get certain numbers like “internal heat gains) it does bring up one issue – is a PHIUS home only a PHIUS home if X number of people or more live there?

For example a couple builds there 4 bedroom dream home that they want to raise three kids in – are they penalized because they haven’t had them yet? What happens if all the kids are in there teens, does the house no longer qualify when one, two or all three move out?

Jumping the shark or…

I hate to ruin it for most, but while they have loosened the standard pretty widely, I don’t think this would be considered jumping the shark. Granted I know a few builders that might feel a little cheated, but overall I think PHIUS will get what they are after, a slight to moderate uptick in certifications (and building better is never a bad thing).

They may even pick up some ENERGY STAR & Net Zero Energy Ready builders who were pretty close to it before but weren’t ready for the jump. Shoot if I am reading this properly this will even increase the ES & NZER builders as being certified by PHIUS means you also pick up those two certifications also.

As for builders, you may want to pay attention as you may just be looking at the 2030 (or earlier) code right here. In fact I have a feeling in the next one or two code cycles you will see a move from whole house ACH leakage numbers to a tighter envelope based one.

As for the critics from before whom they were trying to appease, all I can say is it was a good thing they weren’t on the moon project or we would still be looking at it with only a telescope. If it wasn’t for programs like this, Building America Challenge and others, do you really think that we would have moved so far forward in our quest for energy efficiency as we have? (now onto water)

My only big catch with this, is it makes a great standard – it just isn’t the Passive House standard and I think it should be rebranded. This is one reason why I will stick with calling it PHIUS. With that I would love to hear your thoughts…