I’ve looked everywhere… read the code book three times… you’re full of it, they fail… The issue? Well that is where does it state that while duct testing is required, only those following the Prescriptive* path have to be at 4% or less while those following the Performance* or ERI* Paths just have to test & the result doesn’t mean anything*** per the 2015/2018 Energy Code? *This piece builds off of Energy Code Basics: 3 Key Terms & the Compliance Paths which started a series designed to help clear up confusion related to the Energy Codes (IECC). As a certified HERS rater and ICC Residential Energy Inspector / Plans Examiner with hundreds of tests & inspections we hope to clear up some of the code speak and where possible turn it into easier to understand language. 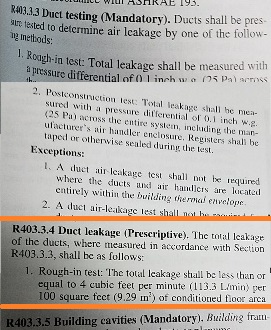 The reason I left 403.3.5 in there & showed the full layout is to help eliminate one issue many inspectors have & that is the flow rule. Everything from above essentially flows down in application & for some reason they seem to remember the 4% requirment being the first thing called out. As you will notice, it is below the section on everyone must test and secondly it states who it applies to specifically. To cap it off that is the only parts that apply to testing and we move into the next mandatory item. Thus everyone must test & give the results to the AHJ, but only those following the prescriptive path must be under 4%.

Starting in 2009, most builders & HVAC contractors were in for a shock when the code mandated that the ductwork & the complete system required testing. Quite honestly they had it right in the 2009 cycle when they had a tiered system based on when you were testing. While many of us expected things to tighten up some in the 2012 version, I got to say I wasn’t expecting them to flat out go – everything must be at 4% (3% at rough without the Air Handler) no matter when you tested. Needless to say I expected to see some pushback in the 2015 cycle & amazingly while t here was some, it took an interesting twist as shown above, and is probably one reason why there is so much confusion on it.

*** Don’t be Stupid aka Yes folk’s it does matter:

In simple terms, while the test results per se don’t matter they still do. You got to remember that leaky ducts means needed airflow is not getting to the rooms it needs to. You also have to think about where some of these ducts are especially when it comes to the returns – not only can you be introducing super hot or cold air in, but also dust, allergens, mice droppings, etc… As for the supply side that can lead to some interesting condensation and mold issues. Also just remember that by code you still need to seal all the joints & seams up which is part of what the test shows. My recommendation is that if you are a builder that you discuss this with your HVAC contractor & you both come up with some allowable limits in writing. Better yet try to get all your ducts inside the thermal envelope thus eliminating the need for code testing – though I would still recommend it with limits. Now of course if you are going prescriptive they need to know that so they can test earlier rather than later. As an additional heads up, in Illinois when they adopt the 2018 IECC (see provision R03) expect more AHJ’s to state that they want third party testing.

What should my leakage be at?

Optimally you would be at zero but that is essentially impossible – the best I have seen & tested was just below 1% in a 925 SF house but they had very few duct and a single return. For those with simple layouts & a single return you should easily be able to hit 3% or less (yes even at final). For multi story houses with complicated runs and returns in every room (you just doubled the amount of ducting with returns) you are going to be hard pressed to hit 4% (though it is doable) without going the aeroseal route if tested at final. During the rough in stage (before insulation goes on) you can get it down to 4% with some effort – in most cases I would say a company testing at final did pretty good hitting between 6 to 8%. ENERGY STAR – to qualify for ENERGY STAR all units are tested and they utilize a tiered system for qualifying: 4% at rough or 8% at final for homes with one or two returns. For a duct system with three or more returns the maximum is 6% at rough or 12% at final.