You are here: Home / Building Codes / Monday Musings: 1st look at 2021 IECC & why the NAHB is seeing Red

As many already know, building codes are updated on a three year cycle. The process for the next code cycle begins even before the ink is dry on the previous version. Due to the complexity of the codes, time required, and the shear amount of proposals to go through most individuals leave it to their organizations to keep them informed & even protected.

Apart from a major tragedy most changes are incremental and for the most part the code cycle is routine. Part & parcel is that once the final industry voting is done you know how the bulk of things are going to shake out before the “Building Officials” vote occurs. (For example: NADRA’s recap of Deck Changes upcoming)

So what left the NAHB, that was patting itself on the back to seeing red & crying foul? Shoot why is RESNET suddenly wringing it’s hands over the ERI? Shoot what does this mean to you &/or is their anything you might want to prepare for? If you’re a lighting designer, architect, home builder, etc… yeah. For those that just want to see what changed, scroll down to “The Changes. For the rest that want a little history & how /why the NAHB shouldn’t have been surprised keep reading.

Directly from the International Code Council (ICC) code books; “In order to ensure that organizations with a direct and material interest in the codes have a voice in the process, the ICC has developed partnerships with key industry segments that support the ICC’s important public safety mission. Some code development committee members were nominated by the following industry partners and approved by the ICC Board:

The code development committees evaluate and make recommendations regarding proposed changes to the codes. Their recommendations are then subject to public comment and council-wide votes. The ICC’s governmental members—public safety officials who have no financial or business interest in the outcome—cast the final votes on proposed changes.”

The NAHB takes the code process very seriously but as many know it is an organization that is full of contradictions. You have the ones that believe that code changes are not by & large necessary and try to hold the line. They typically love the mantra “you know for every $1000 X amount of people are priced out…” group. For the most part this group is quite successful.

You also have the “research” & “green” section that show how changes can be made that saves money overall, makes buildings safer, leads to utopia, etc… In many cases they might be present but generally they act as advisers to the first group, though sometimes their studies & experts are used for changes contrary to NAHB’s primary positions.

One reason why they are so successful is a major “get out the vote” with building inspectors during the final vote to help stave off any changes / maybe help kill off something that might have got past them in the original voting period. As I said they are quite successful in this arena but…

How many have heard; As Cali goes, so does the rest of the nation – I have heard that almost my entire life & it still rings true. When California said all new buildings will be Net Zero starting in 2020, Architects & numerous others (heavily involved in the ICC process) said we will be also, but we will shoot for something more realistic – lets say 2030. Well California managed to do it, but for most following the I-Codes especially the “Energy” portion it looked like it just wasn’t going to happen. Why? 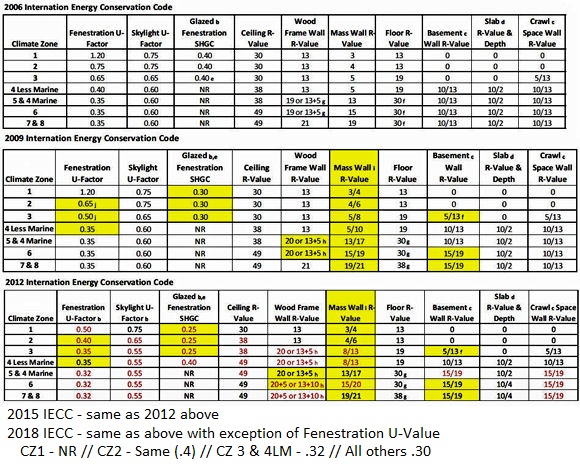 Well because there hadn’t been any significant improvements during the last few cycles (essentially 1% improvement for last 2 cycles). Looking at the chart above you can see the last time “insulation” values were modified was 2012 & they were on track to stay there again. For the most part no one really had an issue with taking the 2015 cycle off (especially as other things were improved on.) When 2018 rolled by with no real updates, well…

If you don’t vote

If you don’t vote, no whining about the… In all honesty numerous governmental agencies (and of course others) were pissed when the 2018 cycle came & went- so much so that they met with the ICC and others about this lack of improvement. Well guess what – this resulted in a game changer for them and for the NAHB which essentially got blind sided or more than likely just thought it was all talk – I mean only code officials can vote (and we have a lock on many of them) so…

From the ICC’s Bylaws (revised Feb 2013): 2.1.1 Governmental Member – A Governmental Member shall be a governmental unit, department or agency engaged in the administration, formulation, implementation or enforcement of laws, ordinances, rules or regulations relating to the public health, safety and welfare…

As you can see, no where above does it say only Building Officials – Governor’s Offices, Mayor’s offices & the list goes on can qualify. Remember those disgruntled individuals – yep many of them all attend Conferences of Mayors, Governors, & the list goes on. Which the NAHB noted “it was discovered that hundreds of new government employees from towns all over the country were validated to vote — and they voted in droves.

There was a concerted effort on the part of efficiency and environmental groups to engage like-minded governmental members who work in environmental, sustainability and resilience departments. These new voters appear to have worked off the same voting guide and simply voted their party line.”

The Changes aka the Party Line

As mentioned, these groups were all about “Energy” as a quick look shows zero changes for the Administrative, Existing Buildings, IRC, IGC, IBC General or Structural Code Editions. Now when you get to the IECC things are dramatically different. On the Commercial side there were 9 out of 95 items being overturned and wow baby, 22 of 92 listed items in the Residential section were overturned. First the Residential Clif Notes section 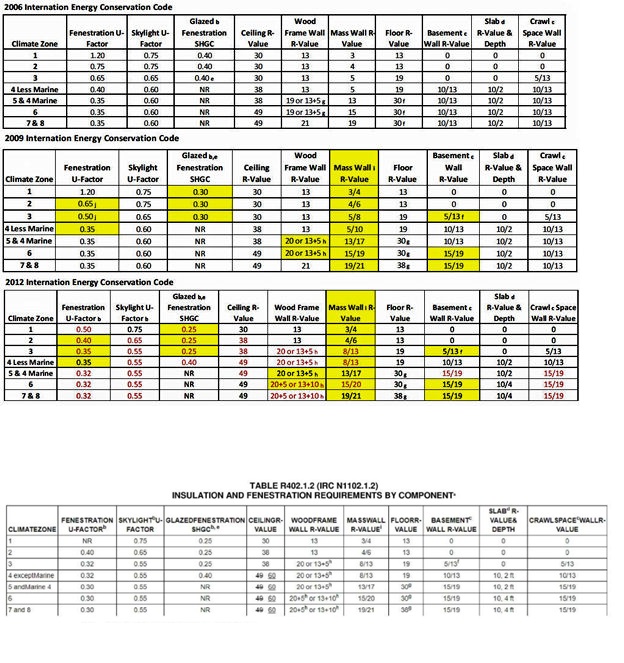 Reason: The purpose of this code change proposal is to improve the energy efficiency of residential buildings by roughly 5% or more, and to provide code users with flexibility to select the measures that make the most sense for each project… This proposal largely mirrors the format of Section C406 Additional Efficiency Package Options—an approach to improving commercial buildings that has been included in the commercial energy code since the 2012 IECC… In sum, this proposal will allow the IECC to build upon recent improvements and create a new model for improving and adding flexibility to residential building energy codes going forward.

I will be hitting the commercial ones in a later piece as I mentioned earlier. Also this is not everything that was passed, this only encompassed items that were overturned.

Other Items Coming Down the Pike:

Many of the “Party Line” Governmental Groups will keep on pushing to hit the 2030 goal – expect to see the performance path to change to a Passive House version (not expecting as tight but somewhat close) where you are only allowed so many BTU’s being used for heating & cooling maybe in the next cycle but probably the 2027 version. I expect it will be a modified US version based on climate zone not individual cities. By 2030 expect to see that solar or or options becoming mandatory which will be very similar to California’s requirements.

Another item many states are pushing for is the requirement of pre-wiring for Electric Cars or to be EV Ready. Not only do many of these apply to new construction but also to remodeling/renovations. Most locals for the most part can not bump up the residential efficiency beyond the code as this is generally blocked at the state level.

One other item is congress is considering requirements that DOE establish certain targets (aka one of the 800 lb gorillas in the process) be met & supposedly this would block the ICC voting… Ummm, no it wouldn’t, it would just formalize that DOE would be pushing for X, Y, & Z targets – not how all members would vote. Just remember there is only so much you can get from efficiency (HERS 40-45) before you can’t get anymore & now need power to heat, cool, & run appliances.

Final thought – while the IRC & many other codes were not affected this time, that may not last – Electric & Plumbing I expect to see “targeted” (especially water). You may also find some resiliency issues pop up for this group – think global warming, along with normal flooding, storms, shelter in place scenarios…