You are here: Home / Money Saving / Quick buy them before… 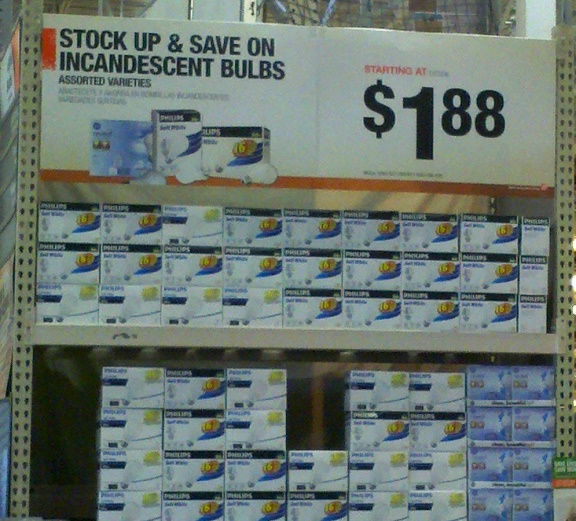 Yep, apparently it is the last hoorah of the incandescent light bulbs still in stock. As you may recall from the last presidential election, the dreaded government decided to take your ability away to use them via the “incandescent light bulb ban.” Well no not really, it just raised the standard of light output required for certain bulbs, but hey, why split hairs?

EISA aka the Energy Independence and Security Act of 2007 was signed into law by President Bush and tips the scales at 310 pages. Much of it deals with items directly related to how the government uses & reduces their energy usage. As part of this… oh you will love this… many incandescent light manufacturers actually lobbied to require increased standards for their fixtures.

As it relates to light bulbs a 25% increase in efficiency was called out for utilizing the stats from an incandescent bulb. This was phased in over 3 years with 2012 essentially eliminating the manufacturer of 100 watt light bulbs, followed up by 75 watts in 2013 & as of January 1st, 2014 the 40 & 60 watt bulbs. In 2020 a second tier kicks in requiring all bulbs (except excluded ones) manufactured in 2020 (and beyond) produce at a minimum 45 lumens per watt (around a 200% increase in efficiency).

Let’s play you bought the ad above & bought 5 packs…

I think the math above does speaks for itself… (which doesn’t even get into the LED specs) so how about all those dizzying arrays of choices & those new lighting labels? Well I think that piece will just have to wait a little longer, like maybe sometime next year?