You are here: Home / Wordless Wednesday / Wacky Weds: Politics can be funny… & a few quick thoughts

Generally we stay clear of politics especially because the problem lately is becoming “if you are not with us you are…” a racist, clueless, brainwashed, & the list goes on. It doesn’t matter what the topic is as most people just hear you support X or Y and they close down instantly to anything you might have to say.  It has gotten so bad that people who have been real friends (yes this existed before Facebook) are no longer willing to recognize one another and won’t even talk.

With that I got this ad the other day & was glad I didn’t just take a swig of coffee before seeing it. 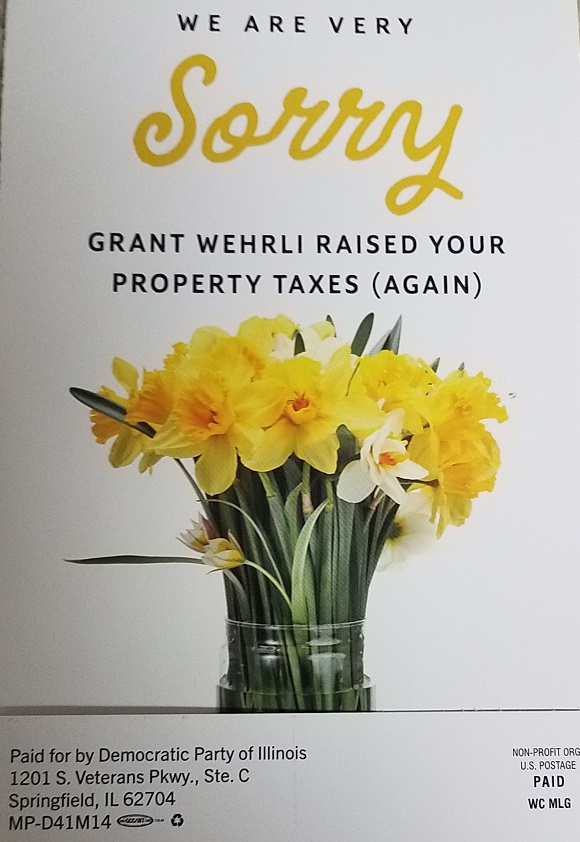 I can imagine one group needing neck braces from jerking their heads around to do a double take (yeah I know some are also probably spitting nails), while the others are rolling on the floor laughing & wondering just how many people might just believe it.

For those of you who don’t live in Illinois; Grant is of course a Republican, thus the mailing from the Democratic party. The funny thing is, Republicans in this state have essentially no say in anything  that applies “Statewide” – the House, Senate, & yes the Governor is all Democrat controlled. In the House or Senate for the most part they are simply viewed as fleas & while they can make some noise, that is almost all it is.

Making it even funnier – this arrived within 2 days that Grant & two other Republicans joined with three Democrats to start investigating the Speaker of the House (who also happens to be head of the Illinois Democratic Party) for accepting bribes / granting special favors which has led ComEd to essentially pay a 200 million dollar fine.

So yeah I had a good laugh and if you made it this far, hope you can see some of the humor in it, no matter which party you might belong to.

Let me just finish by saying that no party is perfect & both have some good points / ideas but you have to listen & remember that this country was founded on a revolutionary principle; “We the People of the United States, in Order to form a more perfect Union…”  – they never said it was “perfect” but it is up to us to continue the process that was started. If you can’t see that we have come a long way from then & lead the world in many issues, well… There will never be a perfect Utopia, but by listening & working together we can get closer.