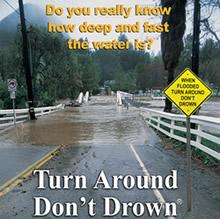 Continuing with this Alabama’s Severe Weather Awareness week, we are now on Thursday which is dedicated to Flooding.  A Flood can take several hours to days to develop and can occur even where it hasn’t been raining. Flash Floods used to be a major concern of mine when hiking in some of the back canyons in northern Arizona & Southern Utah. For the most part if we could see storm clouds in the horizon we choose a better day or moved to higher ground.

Interestingly the last three days of topics, which covered Tornado’s, Severe Thunderstorms & Lightning we had never covered before. Flooding on the other hand we have covered twice in regards to travel; the first time was for Flood Safety Awareness week and the second time was after Irene pummeled the Eastern seaboard with our post aptly entitled “Don’t be that guy.” With that in mind, let’s take a quick look at what the warnings mean, and what one should do if their house or business is located in a low lying area.

As a reminder, flood waves & especially flash flood waves move at incredible speeds with a lot of power. They have been known to move boulders, wash cars completely off the road, tear out trees, destroy buildings, bridges, and even scour out new channels.