You are here: Home / Wordless Wednesday / Wacky Weds: Propane as a Refrigerant? 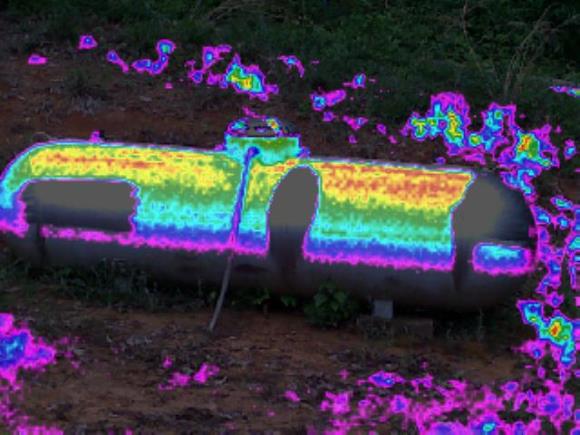 This is an infrared shot of a propane tank I used in a class seeing if they could understand what they saw. I got to admit after going over the basics they did pretty good. Ahhh but what about the title, well would you believe that some HVAC companies are using propane as a refrigerant for residential HVAC systems that are leaking? I wouldn’t have believed it either till I got this email from the EPA…

EPA Warns Against Use of Refrigerant Substitutes That Pose Fire and Explosion Risk
Release Date: 07/01/2013

WASHINGTON – The U.S. Environmental Protection Agency (EPA) is warning homeowners, propane manufacturers and sellers, home improvement contractors and air conditioning technicians of potential safety hazards related to the use of propane or other unapproved refrigerants in home air conditioning systems.

EPA is currently investigating instances where propane has been marketed and used as a substitute for HCFC-22 (R-22), a refrigerant that is widely used in home air conditioning systems.

Home air conditioning systems are not designed to handle propane or other similar flammable refrigerants. The use of these substances poses a potential fire or explosion hazard for homeowners and service technicians.

EPA is aware of incidents that have occurred both overseas and in the U.S. where individuals have been injured as a result of the use of propane and other unapproved refrigerants in air conditioning systems. We are investigating and will take enforcement actions where appropriate. Other names for these unapproved refrigerants include R-290, 22a, 22-A, R-22a, HC-22a, and CARE 40.

At this time, EPA has not approved the use of propane refrigerant or other hydrocarbon refrigerants in any type of air conditioner. Homeowners and technicians are strongly recommended to limit use of propane or other hydrocarbons to only those appliances specifically designed for these substances and that are properly marked to alert technicians that the equipment contains a flammable substance. EPA has approved the use of propane as a substitute refrigerant for R-22 in industrial process refrigeration systems and in new, stand-alone retail food refrigerators and freezers that are specifically designed to use flammable hydrocarbon refrigerants.

R-22 is being phased out of production and importation under the Montreal Protocol, an environmental treaty ratified by every country in the world designed to reduce and eventually eliminate the use of ozone depleting substances. EPA’s Significant New Alternatives Policy (SNAP) Program has already listed numerous refrigerants with improved environmental, health and safety profiles and continues to evaluate other refrigerants that can be used to replace R-22 and other ozone-depleting substances.

As the saying goes – Don’t try this at home folks