You are here: Home / Around the home / Consumer Awareness / Monday Musing: Don’t believe the Hype

Lately there is a lot of chatter & hype over a “new study” where many groups are going – wow, we got to ban gas cooking, Electrify Everything, or quite simply saying, see we told you so. They love showing charts similar to this one below (taken from said study) as all the evil attributes of cooking with gas:

Unfortunately, I take it most haven’t either; A) fully read the report, B) know anything about the topic, C) just love jumping on the bandwagon because it fits their view, or D) some combination or all of the above.

The simple reality is that with the exception of Carbon Monoxide and also NO2 (not all the NOx’s), all those other items are related to the food & cooking process. In fact some of those items can actually be found to be just as high & sometimes even found in higher concentrations when you are cooking with regular electric burners or induction. Don’t believe me? Well per the “study”

Although both gas and electric stoves generate particle emissions, gas stoves have been found to produce greater particle exposures. Cooking methods, and the type of food being cooked, can also have a substantial impact on PM2.5 emissions… As mentioned previously, many of these experimental tests involved food, and the PM2.5 concentrations observed cannot solely be attributed to the appliances.

A chamber study demonstrated substantial UFP number concentrations of more than 300,000 particles/cm3 emitted by both gas and electric stoves.

But wait you said higher & the first line states that gas is… That is true, but it comes down to which study is looked at and may I actually say it – was it a true study? In order to compare apples to apples i.e. have accurate results; temperatures need to be the same (higher temperature – more emissions), same type of pan & cleanliness factor in (copper versus non stick), the type of oil used (don’t use olive oil for frying), etc… Case in point comes from another 2001 study… 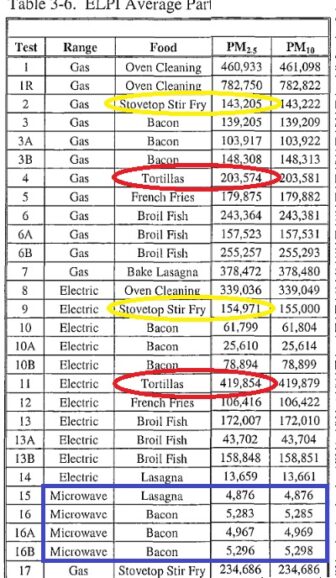 Interestingly in this 1997 study, (as most studies point out) gas is indeed worse almost across the board but not always. Nice thing is at least they performed some semblance of a test and give out their test numbers. Stir Fry is slightly higher (yellow), but Tortillas (red) being twice as bad? Oh & in case you are wondering, this is one referenced study by other studies which this newest study based it’s study off of. Got to love that friend of a friend of a… Don’t believe me, read the “newest” study.

Unfortunately I can’t find the other study I had which also had Induction cooking in it. Yes even induction cooking still has issues, especially with dirty pans, oils used, etc… As I recall they had the highest concentrations of UFP (Ultra Fine Particles)

Still think food is not a factor – check out the blue section where they simply microwaved the items. Yes the counts are a lot lower, but there is some being generated. Good tip, always open a bag of microwave popcorn under a running vent / or at least don’t breathe in the steam – yeah that stuff is bad for you.

The real take away from this & all the other studies is pretty simple – if you are cooking, use an exhaust hood. Calling gas evil, yeah that truly is a non starter for those that can reason. Am I saying not to use electric or induction – no, not at all. In fact I would probably go with induction in my next remodel assuming my house wasn’t all gas.

Oh & as an aside, does anyone find it funny but the push to go all electric (including cars now) is from a state that can’t seemingly keep their lights on especially if the wind starts to blow? Yep, just asking for a friend 🙂

Can we have a Real Study?

In all seriousness, most of this new study is based off old studies where they always seemingly state further research needs to be done…. & yet it never is. How hard is it to get a gas range, electric range, & an induction cooktop & test using the same type of pans, oil, foods, etc… across all three. Then shoot lets add in a recirculating hood, a code compliant hood (20″ up), a microwave hood, and a 300 CFM hood that adequately covers the surface, and now you have the makings of a true study with some practicality for real people.

I know there are lots of combinations but people might start to get that maybe this is a better pan to use, which oil is better for which use, & yes even showing that using my exhaust hood is a good idea. Just my .02 & I would love to hear yours.

Bruce Niles on Twitter stated “Nate – your friend misses the key point: Nitrogen dioxide (NO2) comes from gas stoves, not electric stoves or the food. So the simple act of turning on your gas stove or boiling water on a gas stove releases dangerous levels of NO2 – levels illegal outdoors.” He is correct in part as to my knowledge on NO2 is only a combustion product, so it has been added above; but as mentioned that is only one of  the NOx’s which is what was listed. The other flip side to this is proper combustion does not release or produce CO or NO2.

To DIY or not to DIY – that is the question
Warning; this book may shock you or possibly start a fire
About Time: Truth about endorsements required for bloggers
Of sales tax holidays, disaster preparation & others of interest…
EPA Lead notice requirements for houses built before 1978
10 Questions to ask your Contractor
Let’s Blog Off: Growing up is so hard…
Monday Musings: Polar Vortex Lessons Learned
Tweet