You are here: Home / Off-Grid Living / Going Off Grid in the 21st Century: Water Filtration 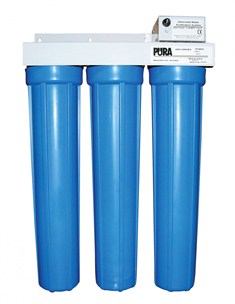 Lately in our going off the grid series we have been focusing on water where we have covered everything from pumping & storing the water, to rain water harvesting & we even looked into greywater systems. This has brought us to one of the most important points we need to remember and that is that we are essentially the utility; and it falls on us to make sure that the water being delivered is safe to drink or use.

I know, I can hear you know, now come on, that really only applies to surface streams – I grew up on well water & we never had an issue, or its rainwater which is formed from evaporation which makes it completely pure. Well lets first look into these water sources and then the best ways to make sure that the water you have is just as pure (or hopefully better) than what comes out of your tap now.

I added natural springs to the list for a few reasons, primarily though because the water comes from the same place, underground. One place very popular for natural springs, happens to be Colorado which also has an interesting history as detailed via this link. Not only do I bring up the history aspect because I find it interesting but for this point made via that site:

To understand the hidden powers of Colorado’s springs, scientists have examined the dissolved solid content of natural spring water to isolate the active ingredients. Early studies indicated that many natural springs absorb minerals from the ground including carbonic acid, which accounts for the bubbles seen in spring water. Elements found in abundance in Colorado’s natural springs include sulfur, salts, calcium, phosphorus, lithium, silica, radium, and magnesium. In Manitou Springs, concentrations of these elements are often two to three times higher than more familiar watering holes such as Saratoga Springs and Baden-Baden. Natural radium, in particular, proved to be an excellent cure for tuberculosis. (Yes folks, radium is related to radon as it one such item that releases it)

So not only does water absorb the surrounding materials, but as we can see each area is different in the makeup. While one generally doesn’t have to worry about bacteria or viruses in well water those can still exist, especially if you have a dug or driven well. One other major issue with any of these types of wells is actually summed up in this line, “Problems with water sewage treatment in nearby Woodland Park led to contamination of Manitou’s natural springs in the 1970s.” This doesn’t include the issues with other contamination sources like pesticides and chemicals that can trickle down into the water supply or are getting injected into the ground.

The process of evaporation is one of the most effective ways to make the purest water available. With that said, have you ever noticed that the leaves & grass appear a little shinier & greener after a rainstorm as compared to a regular watering? One reason for that is because the rainwater contains nitrogen that happens because of a process called atmospheric nitrogen fixation. Another reason is that the sky might appear just a little bluer as the rain has helped cleanse the air of smog and other impurities. Would you like to guess where those impurities now reside? This doesn’t even start to account for what might be on your roof or in the gutters. As a side point on this, not a single jurisdiction out there will approve rainwater for as “potable” without some method of treatment. Even if one was to use it for not-potable purposes, many require that it be labeled, a special purple colored pipe is used &/or it is treated with chlorine if used inside (even if used for just flushing toilets).

For well water, it is definitely best to have your water tested to see what it contains & what it will take to filter out the items you need to. This should generally be done after the well is completed (and maybe required by the state already). We would also recommend testing maybe every three to five years after that. Yes, I know plenty of companies say every year, but they generally make their living off of testing. With that said, if you notice any changes in the water, or slime developing (popping the lid off the toilet bowl is a good place to check for that) is a good tip to bump up your test (see next section). The same also holds true if the well gets submerged by water via a flood, you have issues with your septic system, or some other sort of spill happens near the well.

There really isn’t a good test for rainwater per se, but after the system is up & running I would consider testing it after a few months of operation and maybe every year to three years after that depending on your location, upkeep, & material choices. One item you should be mindful of is aerosol pesticides, chemicals & poisons as these can easily collect on surfaces & be introduced into the water.

When one starts looking at all the available tests, it can not only be mind boggling but can get downright expensive if someone was to test for everything under the sun. Fortunately many companies offer testing packages that will scan for common bacteria, metals, pesticides, etc… that run anywhere from $79 to just under $300. 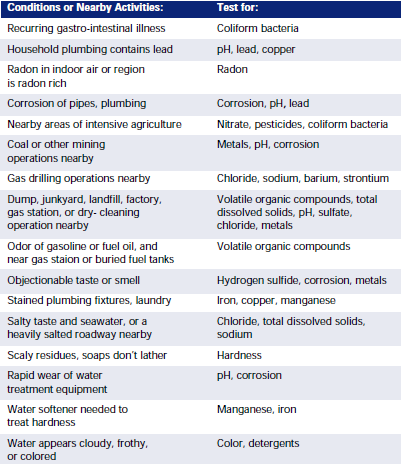 Another major consideration is what might be around you & impacting the water. The EPA provides this chart – P13 (along with a ton of other useful info in this booklet & on their site) for specific tests you may want to add if they are not included in a package already. 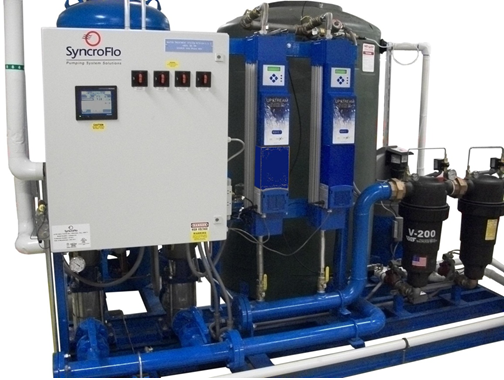 No, you probably don’t require a skid mount system like this one from our friends at Rain Harvest. In case you are curious, this system was designed to handle a huge amount of toilets off of rainwater & contains all the pumps, filters, chlorine & coloring injection systems required.

The biggest impact on what you need is what we established above – what do the test results show? In many cases you will probably just need a simple sediment & carbon filtering system combined with a UV light as shown in our first picture. Shoot even with our water here I will probably be adding that type of system to my place soon along with another pre-filter