Whew, finally I got some time to play catch up on stuff around the house, emails, and shoot maybe I might even be able to get an article done. While I had a few topics I was thinking about, one item popped up as I was going through my emails & left me shaking my head – Water. While there were quite a few culprits leading to this, two really jumped out at me:

“7 Efficient and Flexible Floor Plans: Designed with green features, these smart plans offer wide appeal” from Builder Online. Got to love that title, but reading through their descriptions one really does have to wonder, what are these green features besides using windows for “daylight” lighting or that a few were certified? At least the second link in the article (under Versatile Home Office / Guest Suite) listed some good design choices. Part of the crux of the issue I saw looking at every single plan called out was something similar to this: 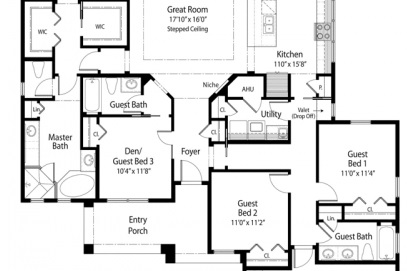 How would you like to be the plumber laying this out, while fighting for space with not only the electricians, but also the HVAC guys? Interestingly they did not give an exact location for the water heater, but seeing most are placed next to the furnace… this is how it would look including one run that would be along the outside wall. 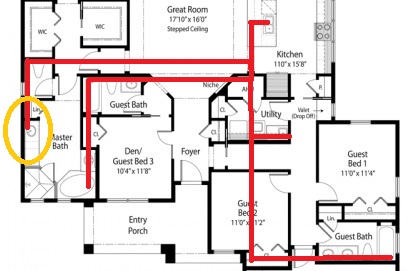 Granted while one could insulate the water lines & use multiple on demand recirculating pumps those options should not need to be ones standard practice for each room, but for use where a design choice (like the separate suite has to be located in another area) is needed. So how can one eliminate a ton of additional labor & materials? It is pretty simple – have all water features located close together.

How? Well lets consider the design up above – imagine if you flipped the great room & kitchen & moved the utility Many builders that have done this create one single “wet wall” where all the plumbing supply run & waste runs are.

Welcome to cdpACCESS® aka Code Development Process On Line Access for IRC/IBC/IECC code changes & voting – in this case the 2018 codes are well under way. Just as a quick reminder – the intent of “Energy Codes” is “This code shall regulate the design and construction of buildings for the effective use and conservation of energy over the useful life of each building.” 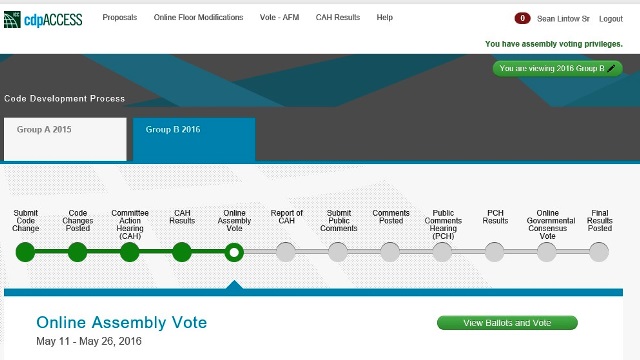 There were well over 2000 submitted changes (per the ICC spreadsheet) that must endure a long process to become part of the codes. Unless you do nothing but live & breathe codes, it would be nearly impossible to keep up – so many groups like the NAHB put out position/voting guides. I got to say I find it interesting on some of there takes – for example allowing for a “higher” ERI / HERS score they oppose, but other features like requiring a “fire watch” while work is under way they support.

Needless to say, a few that jumped out revolved around water – for example showerhead & lavatory fixtures. In all cases I can see they were knocked out as not an “energy” item. For example under RE114-16 (revised – I should have gotten a screen shot earlier) “This is a “green code” issue or not an I-code issue at all. The Plumbing Codes establish maximum fixture flow rates to match federal mandates. Lower fixture flow rates are a customer preference or a requirement of state mandates.” Really?

Water is not Energy related?

I do love that – would anyone like to guess what is one of the highest uses for electricity is used for in the US? If you said treating & pumping water, you would be right. Would anyone care to guess what generally has the largest “burner” in most modern houses; the furnace or the water heater? If you said water heater you are right again. Shoot in many places in the country one of the biggest costs in many homes is water related, not heating or cooling. This is one reason why RESNET has changed the HERS score up to include the length of the furthest run, use of demand-pumps, and Waste Water Heat Recovery devices.

Granted I am not a fan of big government but less get serious:

So should water be considered as more than a “green” issue or local issue? Well you can make up your mind but based on the purpose of the “energy codes” I cant see why it isn’t, but shoot feel free to us & others know below…