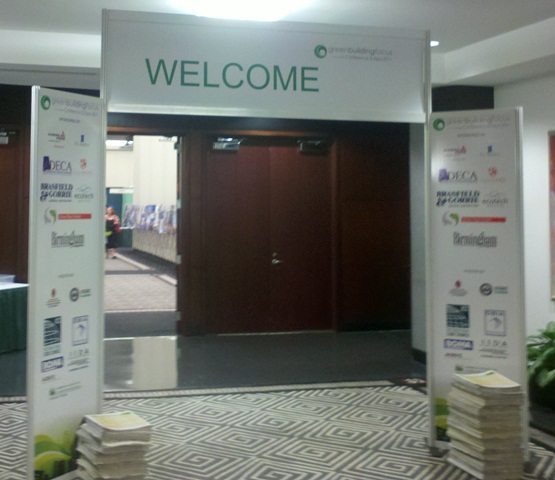 Ahhh day 2, of the 3rd annual Green Building Focus Conference which based on the schedule, was definitely saving the best for last. Unlike last year where all the keynote speakers were all on first day, they split them across the two days for this year. Based on this and other changes, it was nice having a little more time to chat with the first two speakers below & especially Chuck Frusterio of Frusterio. While I have not had the pleasure yet to work with him or his company yet, it was great getting to know him and getting his take on some issues. 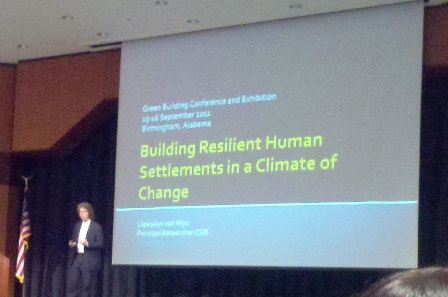 Building Resilient Human Settlements in a Climate of Change – I have to admit, I have a note written down – way too many WWF & UN slides. The main reason, not only is there data highly suspect but it can tend to blind reasonable people to not even look at this subject. With that said, as many people know, based on his seminar last year, some of my views had changed based on his presentation of legitimate scientific data and sound reasoning. So with that we start off with his first section covering, what is Climate Change.

Climate Change is not the weather, but rather a statistical change in statistical properties of the climate over a long period of time. As noted we are in a period of global warming that began almost 10,000 years ago (known 4th period) & it is impacted by at least three main factors with a 4th adding in an unknown variable. The first main impact is based on the Sun & its associated flares which is only growing and only hotter over time (like most stars do). The second is the earth & other planets orbits – you do realize that the moon influences our tides, etc… The third he labeled Mountain Building / Continental Drift (aka earthquakes & volcanic activity) – if you may recall the earthquake in Japan actually shifted the Earth’s Rotation causing a few interesting changes. (NASA article) The forth is the same one he mentioned last year – no one knows what effect man’s production of greenhouse gasses, et al will have on the planet.

While he quite accurately points out that Economic Growth means Carbon Growth, the object is not as many push for (stifle economic growth) but instead finding a way to move towards a workable carbon neutral environment, and then possibly a carbon free environment. While he covered quite a few other topics including risk analysis, he boiled it down to one simple sound strategy which almost everyone should be able to agree on – Design it Right, Build it Right. A house should start out with Passive Measures, so even if the power is out for extended periods, one can still stay safe, relatively comfortable, and be able to live in it. Once it is designed that way and you eliminate as much waste as possible, you should optimize the renewable energy & rainwater harvesting options available. Finally once you have designed, build the house & replace the ecology damaged from building it.

A Critical Analysis of the Green Building Journey: Lloyd Macfarlane

You have to love when a presenter starts off with the question – Why? Why build green, why go green – well as he so eloquently states, who cares, it is immaterial now as it is now main-stream. If you are asking why should I get involved, well if you wish to gain or retain customers… The reasons he gives for many companies not moving forward is they are confused, not convinced, can’t leverage it, or don’t care for the “binary” – either you are X or you’re not as there is no middle ground.

Ahhh but then the tough questions – so as a company, how do I go “green”, do I need to follow a system, and if so which “system” is right? The system part can be tough as he states that there are at least 400 schemes or groups involved in “Green Labeling.” The first step, is defining your “VMOT” – what is your vision, methods, objectives, and tactics currently and what will benefit not only you but your customers if you change them. His three recommendations for looking for a system if required, is to look for a broad based set of criteria, preferably based on LCA, and also third party verified.

A brighter way, everyday… that was the concept behind the Lumen (light) Haus (German for house) which won the 2010 International Solar Decathlon in Madrid. It was great listening & seeing how they modeled the exterior Eclipsis Screen System after a Mashrabiya, (sp? – an Arabic wooden privacy screen) to how they transported the entire building from to DC to New York to Madrid. While they are not competing in this year’s Decathlon, watch out for them making another bright showing in 2013.

The Benefits of Retro-Commissioning: Darren Draper

Poor Darren, about 5 to 10 minutes in I realized that I had heard most of this before (Huntsville GBF Seminar) and I quickly exited. With that said, in case you are wondering, a retro-commissioning is a souped up energy audit (for commercial buildings) where they are focused on fine tuning existing equipment & performing minor upgrades to gain the most performance from them. This is generally useful in buildings where the equipment is around 5- 15 years old & can be optimized via controls – if it is hydraulic or air based you probably are not good candidates for this, but one can contact Mr. Draper anyways to confirm. (They have a lengthy questionnaire to help find out who can benefit from there services & who would be best looking at other options)

I have to admit, this one didn’t even come close to making my list of seminars to attend based solely on the title. (From Building Local to By-Product Synergies, a Practical Approach to Resource Conservation and Re-Use on the Gulf Coast) The nice thing about the smaller more personable size of this year’s GBCF, I had actually talked with the speaker a few times & decided to give it a try after leaving early from the other seminar. Quite honesty, it probably was the best choice I could have made and it was thoroughly enjoyable listening to how she has handled not only her projects, but covered a lesser known seafood waste processing plant that she had no involvement in. In all the cases she listed, she easily covered not only the issues faced, how they were overcome, but also the benefits.

Ahhh Mr. Eric Corey Freed from San Francisco sure doesn’t fail to deliver. With that said, you will have to look for an article later this week on his closing comments on Dodo-Sapiens & how regenerative buildings will save us. Both Eric & Llewellyn made some great points that tie together quite nicely & quite frankly I have run out of room.