You are here: Home / Myth or Misconception / RIP: The Garbage Disposal Unit

Welcome back, to our monthly series of articles where we figuratively put certain products, bad practices, myths and misconceptions to rest. This last month, we were pleasantly surprised to be featured in one of the five primary sections on Daily 5 Remodel (Great resource for anyone involved in remodeling industry – if you haven’t checked it out, you should). In this case, we were listed in the week long Answers section, where the question was asked, “What building products, practices or flat-out misconceptions would you like to say adieu to? How do you respond when clients suggest them now?” While reading over some of the responses, I came across one by our good friend John D. Poole of Birmingham Point…

I would like to banish all the previously mentioned stuff, plus kitchen garbage disposals (does anyone actually have them anymore, anyway?). It never made sense to me that dumping food waste down the drain was any more convenient than dumping it in a nearby trash can. And why on earth would I want to send ground-up everything and grease down my drain to clog pipes, no matter how finely pureed it is? Besides, kitchen composting is now in vogue for those of us planting our little sustainable gardens these days. 🙂

The Garburator (aka the Garbage Disposal) unit, found in approx. 40% of today’s homes, was a key figure in helping clean up America’s Streets, Rivers & Oceans, died this day from complications brought on by clogged pipes, bloating, and outdated infrastructure. John W. Hammes first patented it in 1927 & by 1935; it was being mass-produced by General Electric. By the year 1948, the American Public Health Association was predicting that the garbage disposal would cause the garbage can to “ultimately follow the privy” and become an “anachronism.”

By 1950, numerous legislative bodies were studying &/or implementing plans based on a study published by a Mr. Poole & Erganian on the Public Health Benefits from the Disposal of Garbage in Sewers. While the initial reports looked good; due to an increasing population, lack of common sense, outdated or inadequate infrastructure, and some unseen side effects, the Garbage Disposal was soon outlawed in many locations.

While many of the equipment manufacturers and plumbers (major job security) mounted a valiant and somewhat successful resurrection, the reprieve was only temporary. Now more and more locations either are banning them outright, for certain types of users, or based upon specific circumstances (i.e. septic systems in watershed areas / sewage treatment plants inadequate).

From the EPA’s “A Homeowner’s Guide to Septic Systems”: Eliminating the use of a garbage disposal can reduce the amount of grease and solids entering the septic tank and possibly clogging the drain field. A garbage disposal grinds up kitchen scraps, suspends them in water, and sends the mixture to the septic tank. Once in the septic tank, some of the materials are broken down by bacterial action, but most of the grindings have to be pumped out of the tank. Using a garbage disposal frequently can significantly increase the accumulation of sludge and scum in your septic tank, resulting in the need for more frequent pumping.

While some locals allow a garbage disposal to be used on septic systems, they generally require that the size is increased to handle the increased solids & water use & / or recommend more frequent pumping. I guess this falls under the – sure you can do that, but why would you want to.

In case you have not ever read the manual, when utilizing the disposal, the water is supposed to be running on full when in use & it should be left on for at least 15 seconds after shutting it off. Therefore, instead of just scraping the food into the trash, or better yet composting it, you are burning through a lot of water to wash it down the sink. (Some great advice on do’s & don’ts – though I am not sure I recommend egg shells or small bones going through them)

However, there is also one more small catch – those time numbers are based on utilizing the older 2-gallon a minute faucets, not some of the newer .38 & 1 gallon per minute faucets. Why is this a catch, you are using less water right? Well yes, you are, but you might not be using enough water to flush all the waste down the drain & out of the system.  No matter which way, wasting water does not sound that smart or good to me.

One item I have always found interesting, is the concern that people have with septic systems & you should do this, you shouldn’t do that, etc… because it is bad for the system & then they turn around & say they don’t have to worry about because they are on a city sewer system.  Well guess what folks; you should because the same issues with grease, solids, etc… that relate to septic systems also affect the sewer systems. Not only does it impact it on the small ways shown above, but you are adding to all the water (and electricity that it requires) that must be treated before it can be released into a waterway which can be quite expensive.

Interestingly, after John posted that one comment we used above, in came another one saying that per a book, using the disposal was actually green because it cuts down on methane gas produced when one just sends the scrap to a landfill. Seriously? Well, I guess someone forgot to explain to them, about what happens to all the sludge that is left over from the wastewater treatment plant. Oops… 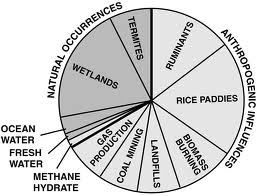 Speaking of methane, in many landfills they are actually capturing it & then using it to generate power and other worthwhile endeavors. I would say that if they were truly worried about methane production, they might want to perform some work around their house to help prevent termites, and limit the amount of coal and gas needed to power their houses. As you can see from the chart by NASA, each one of those items releases the same amount if not more methane gas in the air, than a landfill does.