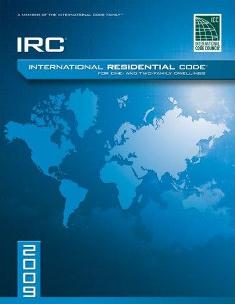 What an interesting day… This morning I had an email newsletter from Joe Lstiburek of Builder Science Corp that started; “Sometimes, in order to do the right thing you have to do “a workaround.” I love the “I-Codes.” But they can drive you crazy. I love them because most of the time they are right. In fact almost always they are right. But, every now and then . . . When they are wrong a workaround is called for. I call it “playing the game.””

I got to say this is very well stated & fortunately if one is involved with the adoption of said codes locally, one can hopefully catch these issues before they are adopted. As for the next part, well that left me chuckling for quite a while; “It is a dirty little secret that the codes display a cold climate bias. It is because the south lost the Civil War. Now it happens that lots of buildings get built in the south…”

Unfortunately after I was done reading that my laughter was quickly quelled by other “professionals” comments & advice being given out:

Let’s see if we can make this easy – per the codes that every municipality, city, county, or state has adopted – they all start off with a similar paragraph:

2009 IRC R105.1 Required: Any owner or authorized agent who intends to construct, enlarge, alter, repair, move, demolish or change the occupancy of a building or structure, or to erect, install, enlarge, alter, repair, remove, convert or replace any electrical, gas, mechanical or plumbing system, the installation of which is regulated by this code, or to cause any such work to be done, shall first make application to the building official and obtain the required permit.

While there are some standard exemptions, none of them apply to most items that this or other supposed ‘Building Scientists” recommend or do. Shoot I work in one area where the only exemption is if the work is under a $100, so one is always wise to check with the local Building Department or what those in the trades call the AHJ – Authority Having Jurisdiction. Please also note that only 1 item out of all those listed related to “new construction” while the rest dealt with existing homes.

Seriously? “Drying is the whole idea… with a closed cell it’ll never get a chance to dry out and it’ll rot; or maybe we need to agree to disagree on the building science of it.” Let’s just be blunt – Building Science isn’t learned from the back of a Lienyne brochure made by some marketing person. If there is a chance that water /moisture can impact an area you need to address ways to remove, divert &/or use a closed cell product. Putting a sponge into a cavity doesn’t help it dry, it just helps hold onto the water.

Granted many older homes do not have drywall on the garage walls or ceilings, but that was changed for two main reasons: Fire & Carbon Monoxide (2000?). The code pretty much sums it up like this:

R302.6 Dwelling/garage fire separation: The garage shall be separated as required by Table R302.6.

Along those lines per 302.5 one should be using a fire rated door (hollow core does not work), no flex ducts or HVAC openings should be in their (302.6.2) & all penetrations are to be sealed (multiple sections). Amazingly one would think that they would actually list that the walls must be “fire taped” aka Level 1 finish, but the IRC has been kinda of quite on this. For some inspectors they look at the ½” requirement as meaning a true ½” (aka taped & mudded), while others point out the intent, and yet others point to the next section & say you have to use a special fire tape.

Quite honestly this is pretty simple – the object is to stop fire & gas from moving from the garage into the occupied spaces &/or attic – it needs to be sealed.  Of course, seeing that many of these “professionals” consider themselves “building scientists”, they might want to remember the air sealing requirements covered in N1100.4 “Walls and ceilings separating the garage from conditioned spaces” & my favorite “Other sources of infiltration.”

In closing, let me just add – please folks be aware of someone calling themselves a Building Scientist as there truly are very few out there. (Yes Joe is one & one of the best) While many individuals will have some nice certs & have studied Building science, there is more to just simply air sealing, insulating & replacing a few items. Shoot most of the best people I know will always say – hey we are always learning. For those that claim no permits are required, call your AHJ to verify. For those working on a house you might also want to remember the simple rule – once you touch it, you got to fix it & bring it up to code. With that, let me hop off my soap box & ask you – to harsh, to mellow, off the mark or what did I forget?