You are here: Home / Off-Grid Living / Going Off-Grid in the 21st Century – Getting the Water where it’s needed 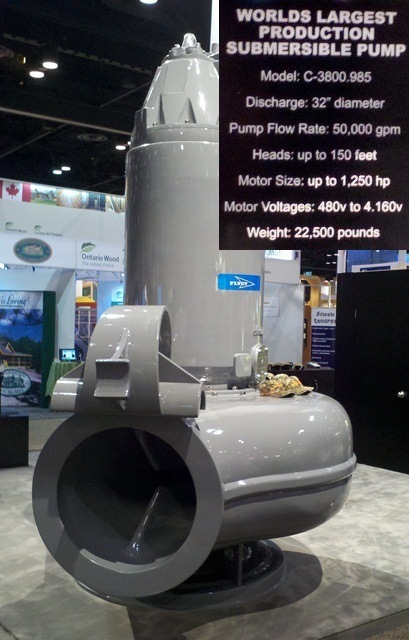 Living in today’s modern homes, life is great – we turn on the tap & the water just flows out. In most cases, we have no idea where it comes from, how it gets to our house leaving us with our only concern of how much is it to connect to the water main for new homes & how much is it going to cost. In ancient times however, homes and communities were originally restricted to river banks or natural springs as most people had to carry their water. While many may credit the Romans (312 BC) with their series of aqueducts as the start of today’s modern water distribution systems, the credit actually lies elsewhere.

In this case, it actually belongs to the Persians with their “Qanats” (700 BC) that takes the prize. A qanat is a series of tunnels & shafts that was used to essentially pipe or transport water long distances to serve a community &/or surrounding farm land. Interestingly enough we can also credit the cooling tower to them, but alas that is an article maybe for another time.  It wasn’t until 200 years after that the first automated pumping system was utilized using water wheels.

In the United States, Boston (1652) was one of the first communities to have a “waterworks” which was mainly built for fighting fires. Interestingly as the pipes were made from trees, if a fire occurred a hole was drilled into the pipe, a hose was inserted and ran to a pumper wagon. When all was said and done, a “fireplug” was inserted & hammered in to cap the hole until the next fire. In 1698 the first steam powered pump was used & in 1804 Philadelphia was the first city to start using cast iron piping.

As you can see by the picture above (Flygt & the world’s largest production pump) & imagine, we have come a long way since then. With that said, in many ways we still utilize many of the principles & techniques in our municipal water systems and with a little foresight, one might be able to utilize them in their modern off the grid home to great benefit.

While 90% of the country is on municipal water systems, 10% so speak is off the grid with the bulk of them utilizing well water. Unlike times of old where one hauled the water up via a bucket, one now inserts a submersible pump into the well, which then pumps water into to an atmospheric holding tank. As one draws water, the pump turns on to refill the tank & to help maintain pressure.  (Picture of a Franklin Electric submersible pump) 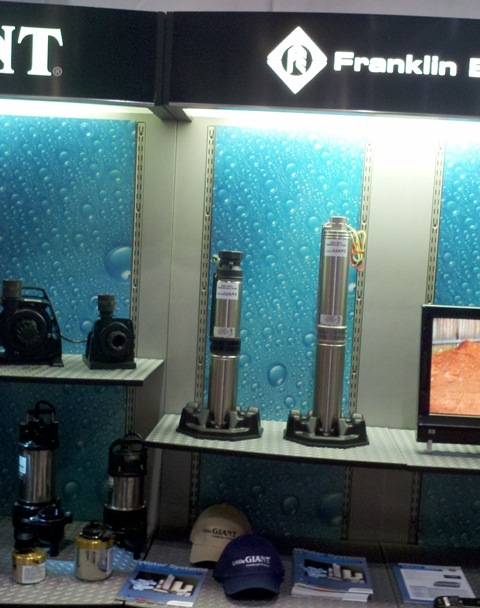 These pumps are generally run off of electricity which is something we need to keep in mind when sizing our electrical. While some systems can run directly off of solar, one can quickly run into issues if there is not enough sunlight to actually power the pump. With a wind driven system, one is at the mercy of the wind which might be okay, if you have a large enough storage tank like we used to see in the west for cattle farmers with their windmills. 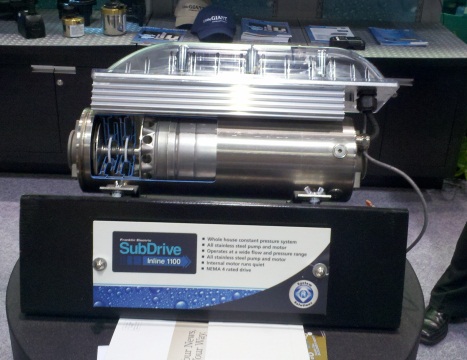 For those with storage tanks, cisterns, or maybe even a nearby river you are looking at a system that can pressurize and pump the water from that area, to your faucets. This is a picture (also of a Franklin Electric system) that can boost the pressure of the water coming out of an appropriately sized water tank to a pressure that one can actually take a shower with, etc… Just like submersibles, many of these run off of electricity & depending on one’s needs, maybe used in conjunction with a well system for optimal performance.

One of the biggest issues with these systems is if the power goes out, or there is an issue with any part of the system you are pretty much out of luck. Hopefully if you have an above ground storage tank there is a spigot or another way at accessing the water but that is something you would generally have to plan for in advance. This leads me to one of my favorite types of systems…

Driving throughout the country and especially the Midwest, one can’t help but notice all the water towers. Not only is this a great way to advertise the town name & local high school mascot but it helps that community get the water where it is needed. I think the best example of using gravity is in New York City. Because of the location of the city compared to its water source, they don’t even need pumps to deliver water to the lower 6 floors of many skyscrapers. In order to deliver water from the 6th floor up, they simply pump the water up to the roof into huge wooden water tanks.

So how might this help one go off grid? Truly it depends on one’s location and if they like the look of the water tanks. If you have a hill nearby to place a tank, or you like the look of a water tank beside your house then you are golden & one only needs to run the pump to fill it up as needed unless your water source is higher than that. As an FYI, the tanks in the video are placed 40’ off the roof for one simple reason & that revolves around physics – for each foot of drop, the PSI goes up by one, so the very top story can get the same 40 PSI as the lower stories get.

Quite simply if you will be on a well system, you need to bring in a professional who can advise you based on your particular location & depth of the well. For cisterns, storage tanks, etc… there are a lot of factors to consider starting off with cost, the location, how many people, animals, and activities you need to support. The larger the size, the better off you generally will be if the pump fails (especially if you are in the middle of nowhere). While there are many rules of thumbs out there, the best indicator of what you will require depends on your current usage & if you will be adding anymore elements that require water.

For example back in Phoenix, our family use averaged around 25,000 gallons of water a month which included a pool, grass watering, and an evaporative cooler. Currently we only use about 20% of that amount as we no longer have a pool to worry about, we let the rain handle the grass, and an evaporative cooler would be a complete waste. Another factor, besides the family size shrinking is also the use of low flow showers, faucets & toilets. If you really have no idea or are currently on a well system the following are a few rules of thumbs for farms: (Based on Gallons per day)