You are here: Home / Program's / A new label for houses? 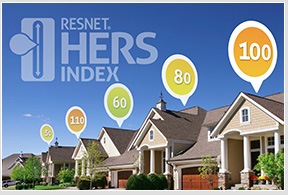 For many the following email & idea may come as a surprise. For some of us the only surprise is that they have taken this long to think of it. It appears that RESNET in conjunction with their Energy Smart Builders program would like a new label to use on their buildings. Good idea or no… well lets see what the email has to say first …

RESNET has been approached by a number of builders requesting that RESNET develop a “RESNET EnergySmart Home” logo.

There are a number of energy efficient builders who are no longer building for ENERGY STAR but would like a logo to attach to their homes in addition to their HERS Index Score It is suggested that there would be marketing power of “EnergySmart Home”.

RESNET is considering designing an EnergySmart Home logo that can be used in a home’s marketing. In order to receive the designation the home must meeting the following criteria:

RESNET is seeking input on what the threshold HERS Index Score should be. It has been suggested that a HERS Index Score of 75 be used and it can argued that with the 2012 IECC the score should be around 60… (this was followed with a link to a survey where 65, 69, 75 & a fourth number were listed along with a spot for comments)

Issues with the concept & a fix?

Assuming they do wish to move forward, I do have an issue with the label idea as it is instantly outdated 3 to 5 years down the line with the changes in the code. For example Building America Challenge had to change to Challenge Home, ENERGY STAR now has to have the version number on it, etc… The other big issue I see with this is that the builders have no incentive to make their houses better if you just use an arbitrary number.

RESNET has been spending a lot of time & money promoting itself as the benchmarking tool for ALL homes, so why is this “label” only being designed for new homes? Granted your retrofit contractors program has not gotten off to a slow start, but still why not include older houses in the mix? Let’s be honest the only difference between an old house & a new one is the new one hasn’t been sold yet & we actually had to verify the insulation pre-drywall. So why not allow for a rater to come in, models the improvements & then verify the work was done properly? Isn’t this why we have all these standards & isn’t this one of the primary markets that started the creation of RESNET?

Just say no to sampling:

If this does move forward I would have to add one more stipulation & that is production builders & Raters do not get to use sampling. The picture above is no joke in many areas, even for some ENERGY STAR builders. Each home needs to be verified.

So am I missing the boat & what are your thoughts. While I would love your comments below, please make sure you contact RESNET as it is much easier to design something right from the start then it is to come back later & try to fix it…