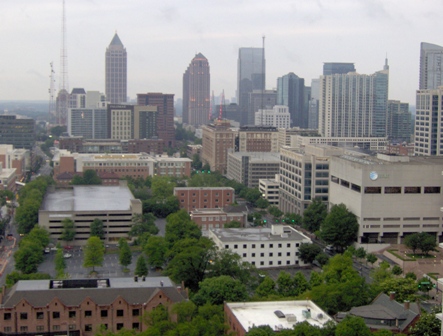 Got to love it… first they state that the math part is over, nah… what they really meant, is that now they are going to introduce new formulas and simply just call it practical applications. My goodness, the last time I had to deal with this much math using just a calculator or pen and paper was 20+ years ago in school & then on a few hand framed roofs. All told, I have about five pages of hand written notes & a few scribbles in the binder. With that being said, the day in class combined with some of the notes.

Today we got started right at 8:00. I have to admit, these guys seem to have the most control over any class I have seen, they are masters at managing not only the time, but knowing when to move on, when to take a break, how to nudge someone, etc… All told, I really only have two gripes – first, either call an area out like it will be shown on the software we are going to use (RESNET) or if you are looking for the conditioned flat ceiling measurement on a multiple story unit – call it out like that, not just the “flat ceiling area”. The second one, falls under redoing the pages slightly, if you have a sheet that needs to be filled in, don’t put it on the back of the diagram – Please.

According to the instructors, Southface adds in more information on moisture control than other providers do & they did a good job about describing problems in this area. This will probably be changing soon for other training providers pretty soon, seeing that the new ENERGY STAR® requirements now are going to include a Moisture Control checklist that was one of the major items missing in earlier versions.

We then got into the Psychrometric Chart which basically covers how much water is in the air, how much the air can hold at a given temperature, and when it will start causing condensing.  When you combine the last few items, a one-inch hole in drywall can allow up to 30 quarts of water to enter the wall cavity, compared to 1/3 of quart through regular vapor diffusion. This then brought us to our next topic of major air-sealing issues that are seen commonly in new construction.

We know moved into one of the most important subjects, what’s for lunch… Ok, maybe not the most important subject, but it was needed and tasted great. As we covered in earlier articles, once you have air-sealed a house properly, you now need to insulate it properly which is what we started to cover in class. We went over the different types of insulation available, their R-Values, and some of their plusses and minuses. We were then introduced into a few new equations dealing with calculating U values, Conductive Heat Flow, heating and cooling degree-days. Based on their experience they are not too excited about insulation under a slab, but fully love the idea of a sealed insulated crawl space. While I fully agree with them on the second one, the first one I would say is debatable based on the customer, their needs, and level of comfort they desire.

One other area of concern I have, is how it seems like RESNET seems to be in love with open cell foam & fail to realize that some of the applications they list are not allowed by code unless other items are done to bring it up to code. While they talked up some of Open Cells benefits, they seem to downplay Closed Cells benefits and forget about those annoying little code issues, like them never being tested and approved for hot roof uses, etc…

We then finally finished off with an explanation of what a PASCAL is, and how it applies to finding out the air leakage in houses & ducts. We then split up into two groups – one that ran over the blower door steps, while the other figured out what the air leakage rates are. They mentioned the issues with ACH (Air Changes per Hour) and brought up one I had never heard of before called the ELR or Envelope Leak Rate. Based off the math and definitions, I can see where the ELR is actually a far more superior reading, while a homeowner would be able to understand the ACH easier. After the groups changed places, it was time to call it a day around 6:15 leaving all of us about three hours of homework.