You are here: Home / FAQ's, Acronym’s, & Terminology / FAQ: Exterior HVAC units – Should I cover my unit, or… fall & wintertime questions

When it comes to the exterior HVAC unit most people wonder about hiding them and reducing the amount of noise. We delved into that topic in our Spring & Summer HVAC FAQ but now that fall & winter has arrived… Yep now the leaves &/or snow starts falling the some start to wonder; should I cover / protect it, is it ok to just leave it alone, or what happens if I have a heat pump unit? Well lets see if we can help answer some of these typical fall & wintertime questions and look at some of the reasons behind them.

Should I cover my system during fall or winter? 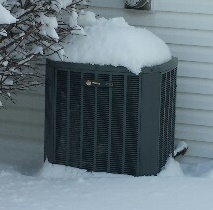 Most units can easily handle the snow loads placed on them so the answer is no. You also do not want to trap moisture in the unit inviting unwanted growth or other related issues. Finally you want to eliminate as many nice cozy spots for mice & other creatures to nest.

Ahh, but how about leaves? I will grant you some leaves might fall through the grate on top but if you are doing regular maintenance that should be easily cleaned out before the start of the next cooling season. With that & due to the issues with mice you are going to want to clean out around the unit at least before the snow starts to fall. Now if you have a tree right above it, it could be worth just covering the top fan only say with a piece of plywood to help keep them out of it. However once the leaves are done falling you should remove said cover.

But I have had my unit damaged by snow before… 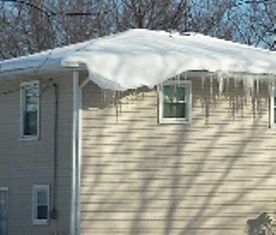 In most cases that is because you had a snow or ice shelf like the small one pictured on the left fall on it. Yes I do say small as that is probably only a hundred pounds or so as larger ones are known to get into the tons. In this case a tarp or piece of plywood isn’t going to help. You might wish to consider building a movable open box with a simple shed roof (with metal roofing) that can slide past the unit up to the wall. Just remember that you will have to remove it before you go to use it come springtime / summer.

I have a heat pump system – does that change anything?

Why yes it does. For houses with gas furnaces, etc… the outside unit is dormant during the winter. A heat pump on the other hand still uses the outside unit. In this case the flow is reversed as the unit is trying to extract heat from the air (yes there is still heat one can get from the air, even when it is 0 degrees outside) instead of dumping it so the unit should never be covered (even against leaves.)

During the winter you want this unit to be exposed to as much heat / sunlight as possible. So you don’t want shrubbery or “evergreen” trees around the unit but rather deciduous trees that have lost their leaves (as those are great for shading it during the summer).

The final issue actually revolves around the snow & leaves – you should make sure that the intake(s) are high enough off the ground where the snow / leaves won’t interfere with them. Generally the best item is a stand that would be open underneath (easy to mow underneath & not allow drifts of leaves / snow to accumulate. against) As for attached to the house – I generally would shy away from those for three reasons: