Living in Arizona, I used to love traveling up to Flagstaff especially during the winter months. One of my favorite places was the Little America as not only did they have a huge roaring fire, an awesome buffet, great Christmas light display, but some of the largest icicles I have ever seen. Ahhh if I had just known what the issues were lurking behind those icicles & under the snow…

An ice dam is created when melting snow is running down the roof & refreezes before it hits the ground. Eventually as this continues the layer of ice keeps getting larger which can leave water piled up behind it. The root cause of this issue is simple & that is your heating dollars flowing into the attic. The fix: stop the heat loss which is done by stopping the air leaks first & then insulating the attic properly.

Ah yes the famous wintertime stack effect picture that shows how heat & moisture movement happens during the winter. In this case with the temperatures listed, the sheathing is still cool enough to help prevent the ice dam issue from happening. 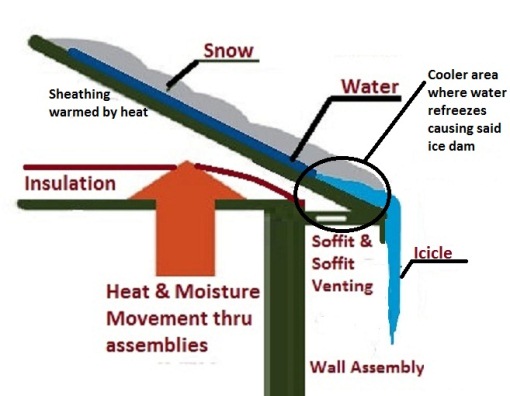 A better view that shows how this issue happens – in this case it is further exacerbated by the soffit venting which helps cool the area even faster. While many equate this problem as only happening with gutters, that couldn’t be farther from the truth though having them can make it larger or to start easier.

First let me forewarn you, just because you see icicles does not mean you have issues as this is pretty common. You see at temps above 20° with the sun shining down it still allows for snow to melt with little to no heat loss inside your attic. As the temperature starts dropping or it hits a shady area, this allows that water to refreeze before it hits the ground causing icicles to grow. Two of the biggest areas for this are on the north side of the house (coldest side) & at valleys. 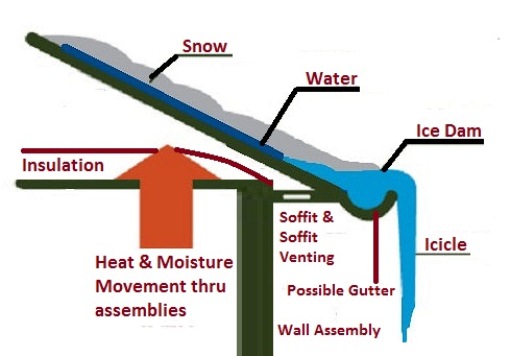 Now the real large “I want to rip your gutters off” icicles is definitely an issue which also probably means you also have an ice dam issue which this picture shows.  The fix is the same as above – stop the heat loss into your attic.

Condensation on the sheathing:

Unless water is pouring in through a roof leak, condensation on the inside of the attic is not an ice dam issue. Rather this is a case of too much moisture in the attic condensing on a surface that is at or below the dew point level.  This issue is not a wintertime only issue, but rather can happen throughout the year when the “right” conditions are met. The fix is very similar to the ones above except in this case you need to find the cause of moisture & stop it. (See first tip section & associated article) 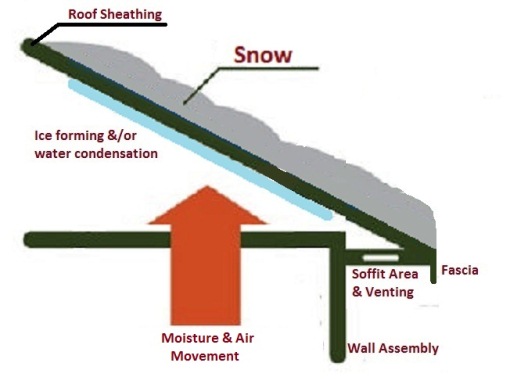 While we left the snow on the roof for this diagram, it really is not a requirement as stated above.

Just a reminder that short term fixes can cost you big time as Peter Troast of Energy Circle shows: