Have you ever wondered what the insulation requirements are like in other countries? Shoot, are we as behind as some might have you believe? Well before we can start to figure that out, did you know that there are also differing R-Value ratings? As one gentleman from down under said “We use metric (SI) units. Not some ancient imperial measurement related to the average width of the forefather’s thumbs.” Yeah it was worth a good laugh.  As a quick point of order, while many like to use the term “R Value” for the “metric” version, that version is technically called an “RSI” Value. 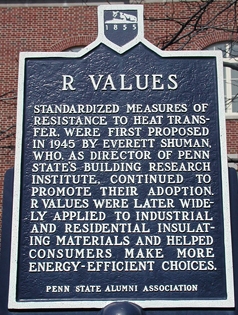 Essentially both measurements still show resistance of heat transfer – the higher the number, the more resistance so, so far – so good. For us “Imperialists” the formula is (R = ft 2 ·F°·h/BTU) whereas the Metric crowd uses (RSI = m 2 ·K/W). So foot versus meter, Fahrenheit versus Kelvin, and BTU versus Watt… That sure sounds like a nightmare to compute but, there is one simple equation to allowing for one to convert between the two. If you take RSI and multiply by 5.67826 you get the R-Value & vice versa – if you take an R-Value & divide that number by 5.67826 you now have the RSI Value.

The ICC (International Code Council) is “International” so the answer is simple right, I mean doesn’t everyone follow it? Yeah, that would be a no. To see which countries have adopted which codes of the ICC you should go to: Local Representatives – ICC (iccsafe.org) In short Mexico (used IECC for the first Energy Conservation Model Code outside of the U.S.), Abu Dhabi & the Caribbean Community and Common Market also use the IECC as a base for their respective versions. Yep that’s it.

How about other markets?

Heh, talk about a nightmare trying to find their standards or versions (as RSI stands for a few other things, etc…). Assuming you can you can find them, you find out that they did some weird tweak that essentially makes it meaningless trying to compare apples to apples. For example, the Brits have a system where they list the minimally accepted performance (they use USI – Value) based on thickness and then you have to go to another section to see what the depth is required to then calculate it out… Quite honestly the Europeans (as they themselves say) have been lax on insulation requirements except for most super cold places.

In most cases, you will find that many countries create a star based system where equipment & insulation is combined into some sort of metric or they have adopted a PassivHaus type standard where you figure out how much energy would theoretically be used per meter to heat or cool a place and then stay below X. While we may actually head towards that type of system, (done in Square Footage of course) we are not there yet & it makes it impossible to compare. Another issue is even if you know for example that New Zealand requires a 1.9 Wall & 2.9 Ceiling Insulation, what do you want to compare it to climate wise? So with that in mind here are two markets & climates similar to ours.

UPDATE: (2.16.21) Recently the ICC has produced a Global Building Codes Tool which can be used to lookup “building” codes in other countries – be forewarned it is very much a work in progress but if you are curious it can be a good place to start.

Canada uses the same Climate Zones (CZ) though theirs needless to say range from CZ 4-8 (though they do have CZ 7 broken into 2 parts.) They also list both the US R-Value and the RSI value in their charts – hmm, joys of being next to the US? 🙂 One small issue is they list “effective” R/RSI value for an assembly instead of just for a product. Yes, we also have something similar, but it is in a separate table and called the Equivalent U-Factor table.

Probably the biggest issue they have, is there are at least 4 major codes (National Building Code / National Energy Code / Ontario Building Code / Quebec Building Code) & even if you fall under the “National” version you might have a tweaked version based on local AHJ. For example this one comes courtesy of the British Columbia Building Code. (The stars are mine & will be discussed more in a future piece) 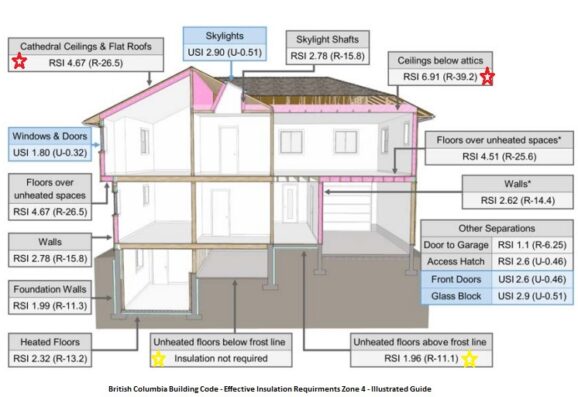 Another big issue, is you can have different requirements based on if you are using an HRV, what the AFUE is, or if you using Electric Space Heating… For example on the walls you could be looking at anywhere from an R 15.8 to R 32 in Climate zones 4 – 6 depending on those factors / CZ 7 & 8 would be 16.9 – 34. Back in 2017 they did update the “National Energy Code” which I have charted out at the end for comparison with ours and… (oh & of course once I got a copy of their 2017 codes – they switched over to U(SI)-Values only…)

Australia is actually the reason I started this post in the first place. It is interesting listening and talking to some of them about their “standard” &/or figuring out some of their terms like Air Sealing = Draught Proofing. One funny thing they do also, is base their RSI-Value for the roof on the color of the roof which we don’t do here as colors can be changed. With that said it is not fully based on “color” but also lists “Absorptance” which we discuss in Cool Roof. Their wall insulation can also be lowered due to shading.

The following map shows how the Building Codes layout the climate zones for Australia. 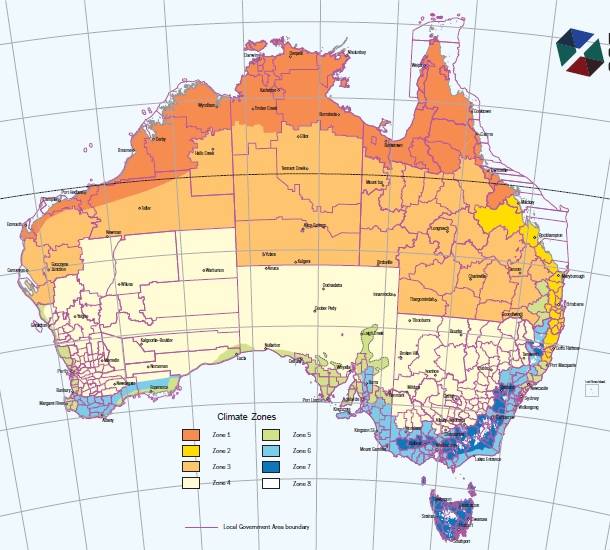 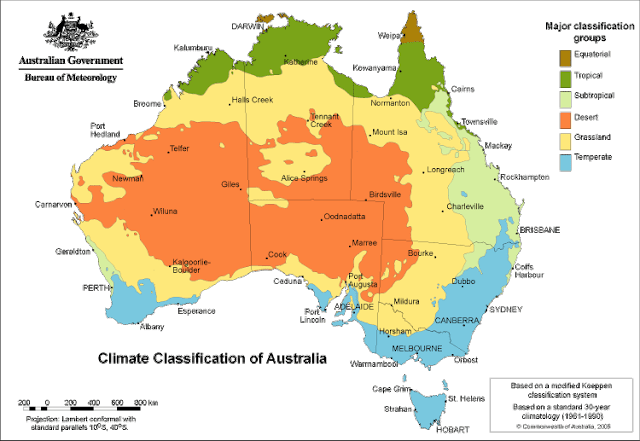 The big issue here is while Australia is pretty close to us size wise (Continental US) their climates and ours don’t exactly line up. For example, their Temperate aka CZ 7/8 which is also listed as Cool Temperature/Alpine is closer to our Climate Zone 6. The Equatorial / Tropical section aka CZ 1 doesn’t compare to any of our climate zones as we don’t have those conditions in the US. It isn’t until we get to their Subtropical CZ 2 that we can say it is close to our Climate Zone 1. That does make comparisons a tad trickier but here we go:

There are generally only 3 items that transfer between the 3 codes: The Ceiling, Walls, & Floor. The Canadian version came from the 2017 Energy Code NFRC.ca, while the Australian one is from their 2016 NCC Volume 2 Part 312 on Energy Efficiency. To my knowledge these are the newest codes as of the time of this writing. If any country does have a higher value than the 2021 IECC I highlighted the text. 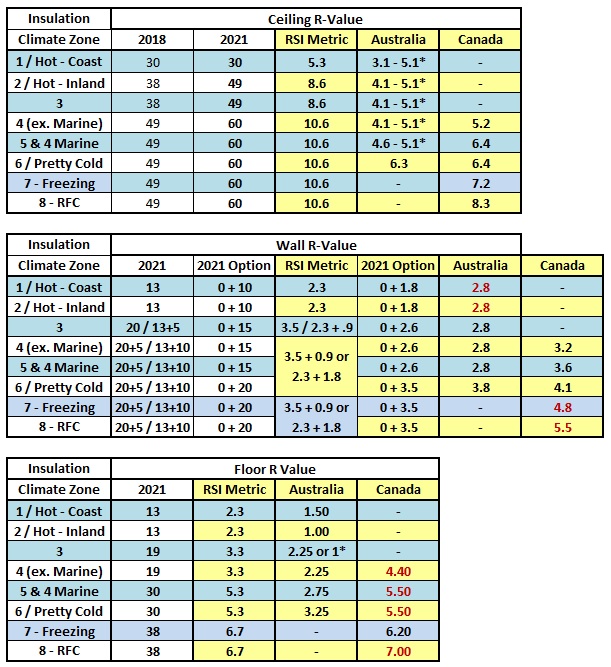 Few Quick Notes – I tried keeping climate zones somewhat close & similar. Also just like any code there can be exceptions or alternative trade-offs but I listed what was the most relevant  option I could with some ranges given especially for the “roof insulation” as discussed above.

Energy Savings & Efficiency 101
FAQ: How often should I replace my smoke detector?
FAQ: Does my freezer really need to be kept at 0º?
Gas vs Diesel vs Electric: Part Deux
FAQ: To remove or not to remove... (WRB's aka Tyvek & tar paper)
Know Thy Numbers: Ice & Water Shield / Barrier
BS4D: NFRC Labels (Windows, Doors, Skylights)
Say what… aka the acronym dilemma
Tweet