You are here: Home / FAQ's, Acronym’s, & Terminology / BS4D: The case of the Sweating Toilet 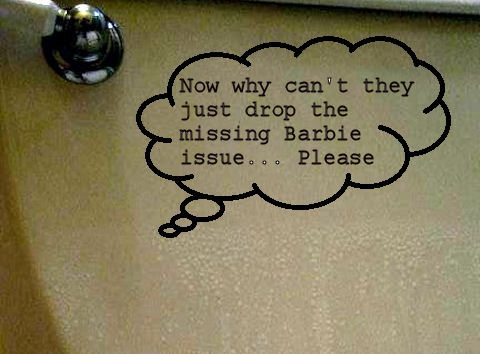 Ok, we know the toilet really isn’t sweating over the burial at sea of one aforementioned Barbie doll, performed with full military honors by none other than one little Timmy… so why is it sweating? The short answer is it’s not; it simply is the water in the air (humidity) condensing on a cold surface (dew point). You generally see this happen during the summer with an ice cold glass of sweet tea or bottle of your favorite brew. In some cases you might see it when water starts condensing on your windows during winter.

While we could discuss grains of moisture, dew point, Psychrometric charts, hygrometry, and your eyes rolling to the back of your head, let’s not & instead focus some common & not so common fixes and then deal with the real issue & how to solve them.

One of the most popular fixes is running to a hardware store & explaining your issue to the guy in the plumbing area where they will point you to; (from cheapest to more expensive) 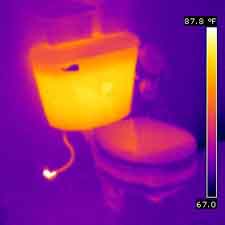 While this one was accidental, some people have resorted to piping hot water directly to the toilets to eliminate the issue. Do I really need to say that isn’t such a bright idea? Let me give a quick shout out & say thanks to Kevin Hergert of Hergert Inspection for allowing us to use this shot. If you get a chance he has some great infrared shots on his site worth checking out.

Replacing the toilet: In all fairness, I don’t have an issue with replacing the older 3.5 to 5 gallon ones which commonly have this issue.  Some on the other hand will advocate replacing a newer 1.6 gallon one with a pressure assisted one as it has a secondary tank inside preventing the tank from being exposed to the cold water. If you do have a newer 1.6 gallon toilet the issue is probably larger than just the toilet.

Dealing with the real issues:

The real issue is two fold, you have a surface that is cool enough to form condensation on due to the incoming water temperature and a high level of moisture in the air. Sure the toilet is sweating which can cause all sorts of flooring issues, but what about what you can’t see. The water doesn’t just arrive at the toilet does it? The copper pipes run in wall cavities & the damage can be quite interesting to say the least.

Electrical FAQ: Off the wall questions...
FAQ Insulation Values & Comparisons - Metric and Imperial
FAQ: Do I need to change my HVAC filter monthly?
LEAD FAQ’s – To Test or Not to Test – that is the question
BS4D: The truth behind a watched pot never…
BS4D: Duct Testing 101
Know thy Numbers: Electricity kWh Cost
BS4D: The HERS Index & Score
Tweet