You are here: Home / Off-Grid Living / Going Off-Grid in the 21st Century – Gray Water (what the heck is that?) 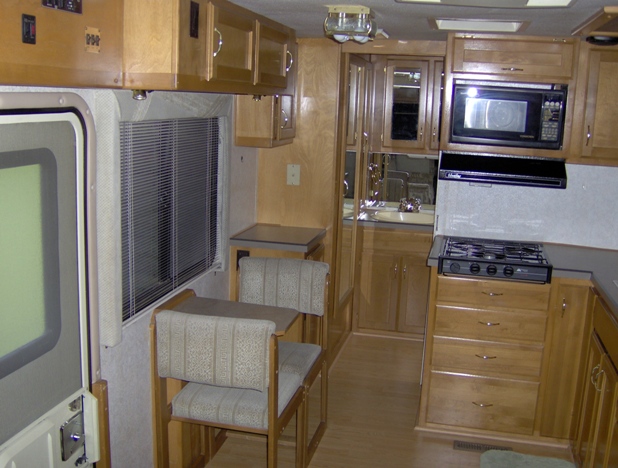 For anyone serious about going off-grid, they really should look into renting an RV for a weekend. Even if one doesn’t go for the dry-camping route & instead hooks up at a full service campground you will quickly learn some interesting items which will apply to your new home. One item that surprises some 1st timers is that there are three water tanks on an RV. Most understand that the clear one holds potable water, the black tank must be for waste, but are left wondering – just what is this grey one for? (not to mention all the gauges…)

The black water tank as alluded to is for waste which is only fed via the toilet. The remainder of the waste lines from the sinks, showers, and even the washing machine (wow, which unit did you rent or buy?) go to a secondary grey water tank. Just like most houses, both tanks on an RV get drained into a central sewage system & hardly are thought of again. I know, but why two tanks, right? Well on an RV there are two main reasons – the first is if you over fill your grey water tank it won’t flood up from the toilet with that associated mess. The second is to aid in the draining of the black water tank & helping to flush the main drain.

Quick Note: If your RV has a washing machine or dishwasher (yes they are out there) you need to be connected to the sewage system with the drain valves / cocks / gates open. Failure to do so… well let’s just say you probably won’t like the results.

Grey vs. Black (Your Home)

In most traditional homes, there is no differentiation made between the two types of waste water and all the drain lines run together & out to the sewer or septic field. This concept or way of doing things though is starting to change as many municipalities are having problems keeping up with the growth, and many areas are being affected by droughts which have also led to many imposing watering restrictions. Some municipalities like Tucson which are affected by both issues have quit simply made it code – all new houses will be built ready for “graywater” use. For many individuals not affected by that as they utilize a septic systems, by diverting the grey water you may be able to utilize a smaller tank, or at least cut down on pumping & other associated issues caused by too much water.

Back in Arizona, particularly in the desert regions, one popular item was to ignore the normal drain for the washing machine and to pipe it directly outside (assuming your washing machine wasn’t outside already) where it could help water a few trees or area of grass. I also know of a few people that added to that by doing the same item with their kitchen sinks, which wasn’t too hard to accomplish as they were on an exterior wall. Unfortunately with this system there are a few issues that do arise with just dumping the water on the ground – ponding water breads mosquitos, and attracts animals & pests closer to – if not inside the home, etc…

After many fits & starts there are now three common ways that grey water is being handled in some homes today; a point of use system, a direct drainage system, and a storage type system. Each of these three systems offers some unique opportunities & challenges depending on your climate.

Point of Use Systems: 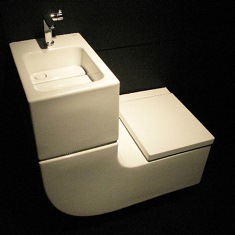 Back in 2008 / 2009 a few new systems sprung up which was the talk of many “greenies” which was a sink integrated with the toilet. The picture above is from ROCA, which is the nicest looking one I can find, but has one serious drawback – the limited amount of water a conscientious person uses while washing, shaving & brushing (EPA WaterSense stats & usage amounts). Based on the stats from the EPA (above) by utilizing a system like this, you might reduce your water usage by 27%. One should also be aware that if you are in California (or a few other places), you may have to put a sign up saying that the water in the toilet is not for drinking… (insert your own punch-line here) 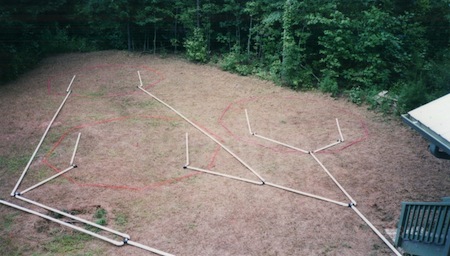 Unlike the old school method of just let it drain on the ground, there are two main methods allowed today; a separate leaching field (area of gravel buried underground to help dissipate water & let it filter back into aquifers), and one that drains out to feed a garden. I personally don’t like first option as many people put them to close to the house leading to water issues in the house. Now even though it does help replenish the aquifer, many people select this option only to help prevent issues with their septic field, overlooking the ability to accomplish that and do something useful. My friend Allison Bailes of Energy Vanguard shows the second type of system (including the installation), in his case a branched grey water system, which not only accomplishes the good points listed above, but helps reduce water needed for gardens & trees. The catch for this type is not only sizing it properly but in real wet, rainy or frozen areas where the system could potentially freeze or back up. (Picture credit to Allison, which shows part of his installation procedure & the end result)

One of the newer types utilizes a storage tank like the first option (only larger) which is generally located outdoors or in a basement. The nicest thing about this type of system is that it can be used to feed water to the gardens, the toilet, or almost anywhere else it is needed.  These types of systems are much more complicated and generally involve the use of filters, pumps, finding & using purple pipe for supplies, etc… Speaking of purple pipe, you may also be required to find specially colored sprinkler heads & label outdoor faucets hooked up to this system that the water is not potable. Generally the biggest complaint I do hear about this type of system is the maintenance, though as more manufacturers are getting on board these problems are being eliminated / made easier to deal with. (Picture credit to City Of Tucson)

Gray or Grey? 1 word or two? In all honesty, all 4 versions are used commonly not only in the US but wherever English is spoken. Technically “grAy” is the “American” spelling, whereas “grEy” is the “English” way of spelling it. Personally I bloody don’t care & will generally spell it as grey. As for the one word or two debate, it also doesn’t really matter (even though I prefer it as 1 word), but in the interests of SEO, I went with all 4 versions to cover my bases. With that said, now for some great resources…