You are here: Home / Alternative Energy / Going Off-Grid in the 21st Century, Initial Calculations for Sizing 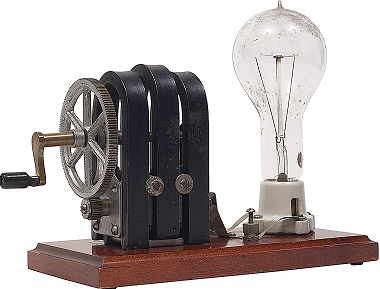 When we first started this series of going off-grid, we started off with Craig Leisher & his family deciding to do exactly that. While him and his wife Susannah decided to pare down there power requirements to just include enough for 2 laptops, a cell phone, and the satellite internet system – we decided to see what it would realistically take for a modern 21st century household (with all the associated toys, appliances, etc…) completely off the grid.

A lot has changed since…

Back in the late 70’s, early 80’s it was just a simple math exercise to figure out how much power you might need. One simply turned your radio around, looked at the label, and entered the watts onto a form, along with how many minutes you planned on using it for, and moved onto the next item. Since then though we have had two dramatic changes; first is how many items went from being mechanical / analog to digital, followed up by an onslaught of new devices as shown in the images below. (Courtesy of EIA.gov) 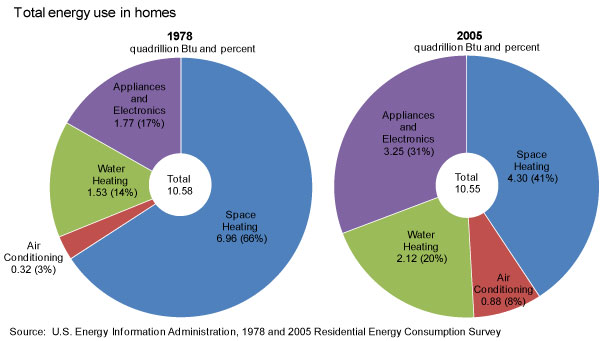 I know, so what, that is just a few more line items we need to add to the list, right? In a way yes, and on the bright side – that change also brought with it more energy efficient devices (i.e. refrigerators use a ¼ of the power they used to, even though they are larger). The catch though is what many refer to as “Phantom Loads.” Basically, an older mechanical device was either on or it was off, while today’s digital devices one will find is that even when they are off, they are still consuming power. For example, your DVR is probably consuming about 50 watts right now even though it shows that it is powered off, motion sensors around 6 to 10, and the list goes on…

Fortunately, there are ways of measuring these phantom loads quite accurately; for plugged in loads there is the Kill-A-Watt device which you simply plug the device into & it tells you what it is using while it is on & what it is using while it is “off”. While this is a nice device, it unfortunately doesn’t help you figure out how much power is being used by your HVAC system, Lights, Water Heater, etc… (You didn’t forget about them did you?) To measure loads on each circuit in the house, there are also devices like the eMonitor Energy Monitoring Service to help you find out what your true loads are.  By using both of these devices together, and combining the last few years of electrical usage together, you can start truly getting a picture of what your usage really is, how & when it is used.

Usage for a New Home:

Determining usage for a new home is an interesting proposition, while we can easily model the house, we can’t actually model how you will use it. Granted there are some “average usages” built in, but that won’t help you if the power goes out during the middle of Super Bowl, because you installed a spa & didn’t have that factored in. The best part though about building a new home though is that we can pinpoint & upgrade certain items that will help reduce how much energy is needed to heat & cool the structure. Can you imagine having a house that you could actually heat by just using just a hair dryer? Well they are out there and possible and the costs to do them are easily recouped on the system savings cost (i.e. $3000+ per kW for just the solar panels). As for the plug loads, appliance usage, light usage, etc… this is where it does help to monitor your existing usage as shown above.

Once you know what your usage is, you can start using these numbers to see which system(s) & what size you will need to help meet those goals (more on this in the following article). As you may remember from our last article, we also need these numbers to compute what our  backup power source will be required to handle (i.e. batteries as the sun doesn’t shine at night / wind doesn’t always blow, etc…) What will invariably happen, is that you will discover that you have some choices to make on how to fit your system to your life style, vice-versa, or you need to find a way to help moderate some of those usage spikes by improving the building. Another interesting item that also pops up, and that is you might need one final backup – a generator.

A generator, why not just oversize the system? While we will discuss, the pros & cons of the 5 types of systems, let me leave you with this quote from Rich at Solar Energy Services. This was based on a question about what happens to the excess electricity produced & how is it handled.

With Solar it is not a problem other than you probably spent too much on the system. The charge controllers will stop the battery charging and the system will essentially idle. Sometimes this is put into a dump load (generally a resistive element to heat water or whatever to use the excess heat.)

Wind on the other hand is another story. There will need to be a dump load to keep the turbine from spinning freely and going into a situation where the turbine is spinning too fast and will self-destruct. Many modern turbines will have a braking system built in but using it will increase the maintenance on the turbine. It is better to put the excess to use somehow.

In real life this happens only during the summer months and then you can run a few more things like maybe an air conditioner for a short while. Battery systems are designed for the worst part of the year solar wise and will produce some excess during the better times. Generally, though a generator is used during the worst times to supplement.