You are here: Home / Alternative Energy / A Tale of Solar Panels, Carts & Horses 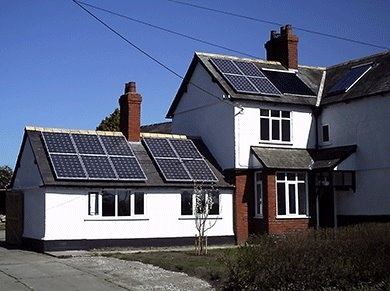 This week we have an interesting guest post from across the pond by a gentlemen named James Hawkins who likes to blog about solar panels and renewable energy. He works for Talk Solar Panels which is a UK firm that was started in 2008 and involves “providing quality solar panel information and a quote comparison service.” After reading another guest post on our site; Are we putting the cart before the horse, he asked about writing a slightly contrarian rebuttal.

“The key point being made in the article is that it clearly not worth getting solar panels unless you’ve got an efficient home anyway… “lipstick on a pig” to quote the article! …I would argue that inefficiency is equally bad in a home with solar as without, and it is probably worth it from a financial perspective in some states to consider going with solar first” Well how could I turn down a piece like this? So with no further ado, Mr. James Hawkins..

A quick search of Google for “solar panels” brings up over 3.6 million results, compared to 2.6 million for the term “energy audit”,  a very basic sign how solar panels are slowly, but surely, coming into vogue. A large part of the reason that solar panels have so quickly gained popularity here in Europe is probably down to their sheer visibility. For example, in Germany – the world leader in terms of installed solar capacity – 10% of houses have got solar panels on their roof.  The UK, which is 11th in the world for solar power production, has around 1% of its houses with solar panels.

“Keeping up with the neighbours” no-longer involves buying a new car when you see one on their drive, but instead it means buying the same shiny thing you see on their roof! However, if money is being put into solar, does that mean that there will be less spent on other home improvements, or on other less flamboyant possibilities such as conducting an energy audit?

The UK’s subsidy structure for solar panels is about to change with measures requiring that an energy audit must be carried out before solar can be installed if the owner wishes them to earn the government subsidy available. Is this concept justified, and should it be applied to the USA – making homes improve their energy efficiency before they bother installing renewable energy measures such as heat pumps, solar panels or a small scale wind turbine?

Is the cart being put before the horse by installing solar panels and not bothering with an energy audit first? Intuitively, it seems very wasteful to decide to help the environment by increasing the amount of energy produced rather than increasing the percentage of energy saved. For example What are the low cost and easy to install measures for saving money around your home? High efficiency shower heads cost around $180, and save around $300 dollars per year. A programmable thermostat costs roughly $115 and will save $180 per year. Sealing leaks in your ducts and then insulating means that heating and cooling can be made more efficient, saving $300 ever year for a cost of approximately $450 to carry out this work. Insulating your walls and loft usually costs about $850, and can save $400 every year.

How does this compare to installing solar panels? The total cost of installing all of these efficiency measures would be roughly $1,600, and the return after just one year would be $1180 – a 74% annual return, certainly a lot better than any savings account! Solar panels are very hard pressed to beat this rate of return. A typical solar power system would cost $13,000 to install, and would offer a return of approximately $1,200 per year in a favourable location in the USA (ie in Texas or California), which means that the payback is slightly under 10%, due to a reduction in electricity purchased from the national grid.

This instantly makes it look like solar is not as good an investment as the long hanging fruit opportunities of insulation and improving energy efficiency. Despite the lower rate of return, there are a few important factors of solar panels which aren’t reflected in the figures, and ought to be considered. Firstly, solar panels are known for being very reliable, requiring minimal maintenance – they are known as a “fit and forget” technology. Secondly, 90% of solar systems will still function effectively after 30 years, whereas shower heads, insulation, and sealing leaks will all need re-doing or replacing before this. Finally, solar panels can receive much higher subsidies than this locally, depending on the state, which means that their returns can be much higher – systems in New Jersey or California can pay themselves off after only a couple of years due to the combination of the reduction in grid electricity use and the local subsidies available.

Overall, for those with a limited budget, conducting an energy audit is usually the best option. However, for people living in areas with high state funding, solar panels may be a better choice depending on the level of financial rewards available. The decision of a household to take its energy efficiency and generation seriously is a step that should always be commended, both for the benefit of our society through reducing man’s damage to the environment, and secondly because either option is clearly a sound financial investment.

HTRC note: First we would like to thank Mr Hawkins again for writing this guest article & even Americanizing the prices. I also got to say I love seeing the “colourful” spelling used and that typical British way of communicating – it sure does make for an interesting read. While I and many others might disagree or quibble on a few points made, I really can’t say that they are not valid points or that the questions asked, shouldn’t be asked. In many ways it comes down to what are you trying to accomplish & why. In closing, I wish to thank James once more & encourage you to check out not only their site and blog, especially his latest article on getting snow off the solar panels (shoot it is worth a read even if you live in Hawaii).