Have you ever heard the saying, if you could just keep the water out of homes, they would last forever. Well there is one more character out there which can be just as insidious & even more crafty… 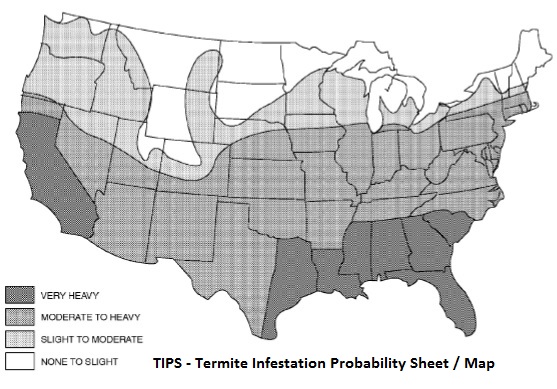 This map goes by many names but most refer to it as simply TIPS or TIP Zones which shows the possibility that termites might be an issue / active in your area. This was created by the US Forest Service back in the 60’s to help educate & inform homeowners as to the dangers of termites and the signs of infestation. The ICC has adopted this map to determine what building code requirements are required in which areas much like the snow load, wind, & other maps or charts. (For more – see the Legal Section)

Out of the 2,300 species known worldwide, there are approximately only 45 in the US. The four main types talked about are drywood, dampwood, & subterranean with the “Formosan” being one of the most destructive and well known. The drywood & dampwood species are generally locked in to specific geographic areas since they generally do not live or move through the soil & cannot handle cold weather. However, even though the Formosan is part of the subterranean species, (requiring soil to live in) it does not require soil to live in as it forms “cartons” or nests for the colony to survive in. 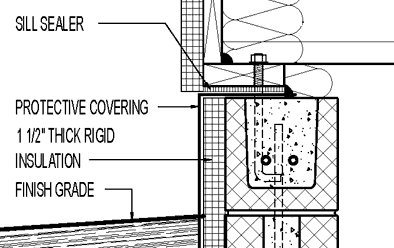 In many ways foam has gotten a bad wrap as one can see where termites & other creatures have burrowed through foam as compared to other products like fiberglass & cellulose which they simply push out of their way. Due to this they have some special language in the codes which can prevent one form using this typical detail;

& theoretically requires one to do this… For many that live in “Termite area” they know this also won’t fly & is something we will cover in another article.

Chemical treatment zones sprayed around the home (aka chemical barriers) is essentially “the standard” used by most new homebuilders. Generally one of two types of soil treatments are used; either a repellent type or a termiticide. The repellent type is applied to the soil around the perimeter of a house to help deter termites from entering the treated area but is not meant to kill. The big issue is that any gaps in the treatment area can allow termites to enter the home with impunity. A termiticide on the other hand is not meant to block but rather to be a slow acting agent (kills with 24 hours to 11 days) which is brought back to the colony to kill them all off.

The biggest issue though is that both of these options only have a useful life of 15 years or less assuming the termites do not find a way through disturbed soil or are able to build mud tunnels over the sprayed areas (mulch beds are a popular means). Assuming you can get the full 15 years, after that period is up, you had better have another solution up your sleeve.

This brings us to the bait stations that are strategically placed around the perimeter of the house. Essentially, they leave a nice piece of grilled steak (dried wood) in the station & one waits for activity. If there is no activity there & no evidence shows up elsewhere, you are good to go. If activity is discovered, they swap out the steak with one with a special rub aka a termiticide to eliminate the colony.

If there is no food, or said food smells unappetizing… the termites have no reason to enter is essentially the next premise per the codes.

A termite shield is essentially a physical barrier that a termite cannot go through. With that, the catch is most “shields” or barriers are not meant to shield or to protect your home by stopping them from entering… Nope, properly designed & installed shields are meant to force the termites to find another route where they can be seen (i.e. build mud tunnels) and thus eradicated.

The final two barriers are primarily used on islands like Hawaii. They are a sand barrier & a Basaltic (volcanic rock) barrier. The sand & basalt used requires a specific particle size (1.6 to 2.8 mm) which not only blocks them from building tunnels but also fills in any gaps. Just like the repellant spray above, any gaps or issues in the barrier gives the termites access. With that a properly designed barrier like this or the ones above, coupled with routine inspections (which is required for all treatments) can give you a lifetime of termite free living.