The leaves are falling, which means for many of us up in the northern part of the country we are breaking out our winter gear & toys while stowing our summer gear. One issue we had while doing this, was we noticed that one of the plastic sleds had a broken handle. While we could just chuck it one has to ask: Hmm, is it fixable and even better can we make it easier to grip? In short the answer was yes to both of those questions. 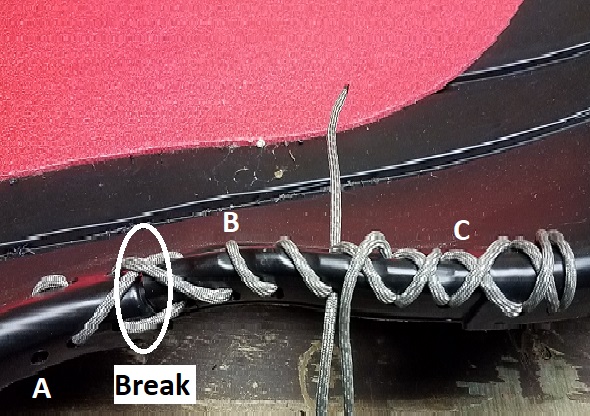 The answer? 550 cord aka para cord also parachute or riggers cord. The first thing I did was drilled some holes “A” (3/16) 3 on each side of the break. Now as I also wanted to be able to improve the grip, I continued on added another 5 holes to not only finish the handle but to extend past it to prevent another break. You can see how I looped around the break to strengthen it up & then continued up the handle “B.” When I reached the end I reversed it much like one lacing their shoes “C.” 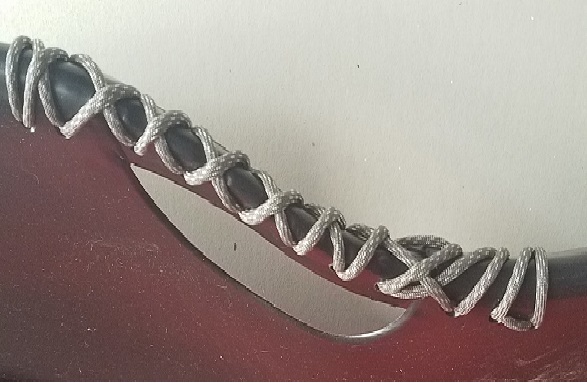 A look at the completed handle. Not only is the handle tied back together but there is more area to grip. I think that is a win. A few quick tips – it might be hard getting the cord back through a hole, just use a nail to help prod it along. One other trick is if you look at the original picture, you can see where I melted the tip together to make it easier to get through. 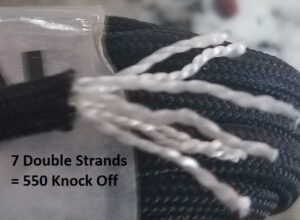 550 cord (Type III) got it’s name as it was rated with a breaking strength of 550 pounds according to military specs. Type III was the most common one used due to it’s use in parachutes and other rigging. Of course then you only had a choice of olive drab or natural.

True 550 (Type III) is nylon (not polyester) with an elasticity of 30%. It has 7 to 9 cords in the sheath composed of 3 strands per core. True military versions would also have specific strands dyed different colors based on who the manufacturer was so any issues would tie back to them. The sheath was then plaited around the cores & then steamed.

Due to changes in parachute rigging, etc… that spec was decommissioned back in the late 90’s so now almost anyone can offer “550” cord in numerous colors, dimensions, or specs. So with that buyer beware as that 550 cord you might think is rated for 550 pounds probably is not. Are most a really good product – yes they are but as mentioned one version may not perform as well as another. With that the possibilities of use are endless & I always have some handy.