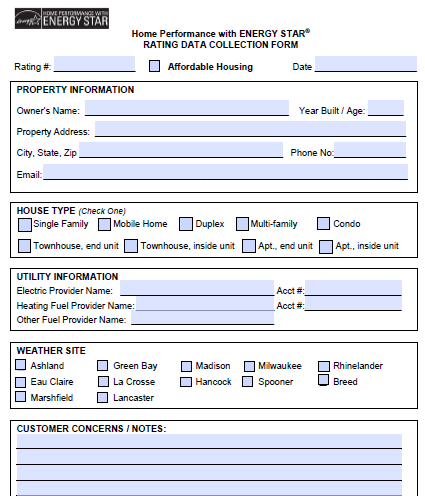 Recently it was brought up that we should post a Basic Audit Questionnaire & Checklist like we did for Kitchens & Baths. The biggest issue with this though is that many questionnaires are developed to meet a programs guidelines or a specific companies focus. So in that vein, I thought I would share a few versions out there so that you can incorporate the best features into your own or know what options are available if you are hiring an energy or home performance auditor.

There are numerous versions , but typically they fall into the following camps with there own special questionnaires & checklists. There are four general types; the Web Based Survey, the Walk Through, The Diagnostic, & the specialized – for more details about all the types; bit.ly/AuditCost

Many local utilities, state & federal agencies (like the Home Energy Yardstick) & even some companies do these. These are essentially just a means to get people interested in savings & getting them to call. Some range from 5 questions up to a 100+.

The Walkthrough / Clip Board Survey (Assessment)

This type of audit is propagated by many salesmen and even some local utilities as a means of diagnosing a home for certain fixes. This brings us to our first checklist courtesy of Remodeling Magazine: 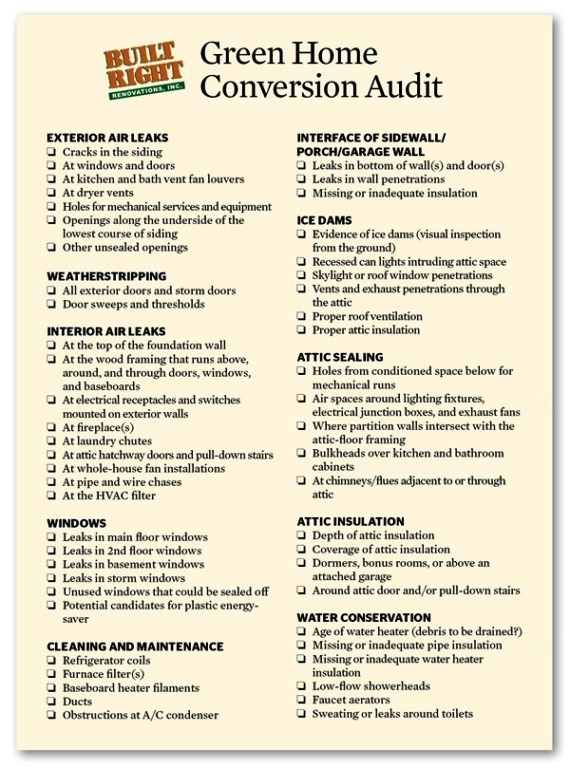 Overall not a bad checklist & you can tell this company is obviously located up north with the “Ice Dam” section.

Want to put real numbers to the issue or see where the leaks are, well then it is generally time to bring in some diagnostic equipment. RESNET & BPI generally are the top two certifying organizations for many programs used by local utilities & programs out there. With that, what is important to those programs can vary wildly based on ones climate.
This is a sheet from Austin’s Green Program which you can tell focuses heavily on the HVAC system 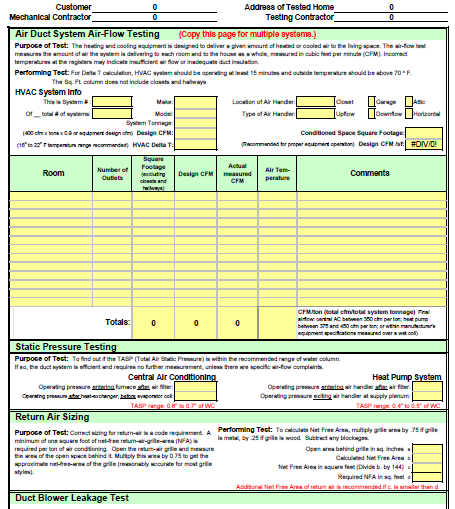 This is one from Minnesota where they have an optional Static Pressure Test, but do not test for duct leakage. Importantly they do include a “Customer Concern” part which many other programs talk about, but don’t leave room for… 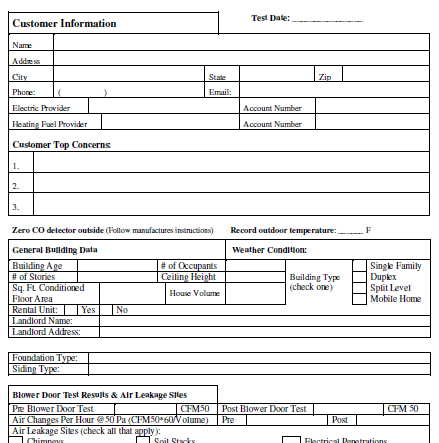 The next three are from the HPwES (Home Performance with ENERGY STAR) programs. This first one is from Wisconsin which I like as it includes the sketch area & customer concerns section directly onto the form.

The next one is a more generic 4 page version which has a sketch section & like the two above is heavy on the documenting the CAZ tests & ignoring duct testing. 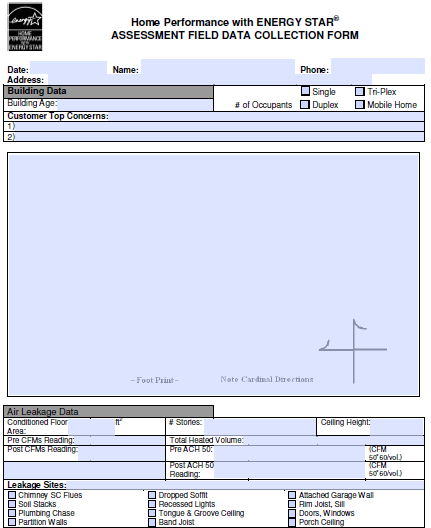 As I recall the one above was being used by New Jersey before they updated to this more streamlined 2 page tablet based fillable document. Oh the red arrow below… Well like many of these programs that are BPI based, they don’t do Duct leakage testing – here they at least use that as recommendation for improving the system. 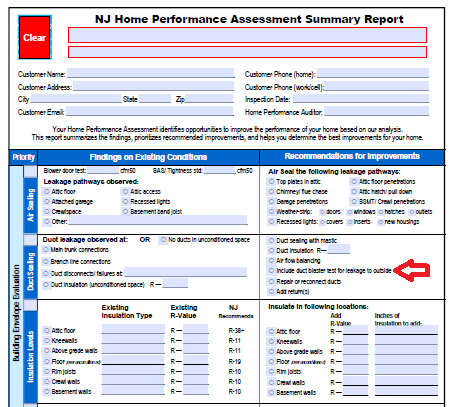 One area BPI trained auditors are typically weak in is actual modeling work. This is where RESNET pretty much shines though to be fair, on the flip side many energy modelers don’t understand why something that might look good on a model wont work in real life. With that here is a form I generally send to architects (generally in spreadsheet format) & use myself when gathering all the data needed for a HERS score. 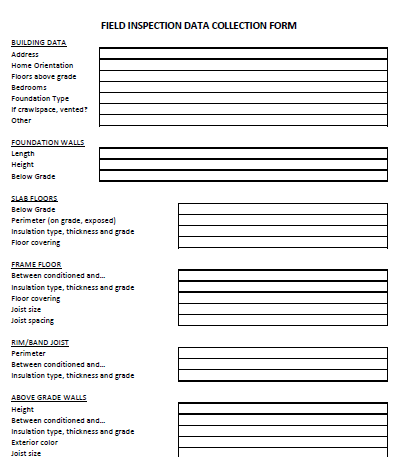 I also got to say I like this one from Southface which also has a reminder section to the auditor. 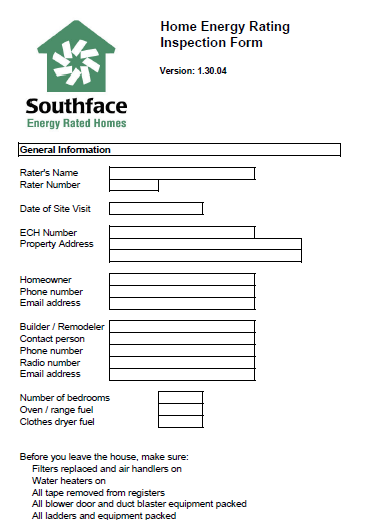 The final type is a specialized type of audit. For quite a while this mainly revolved around items like infrared scans or even program verifications (ENERGY STAR, LEED, Earth Craft, etc…)

Now with the newer codes being adopted many are dealing with code verifications that can vary dramatically from jurisdiction to jurisdiction. For one example here in Illinois some require a TecTite report for Blower Door testing but just a picture for the Duct Leakage Test while others just need a signed piece of paper with the numbers listed.

As another example, in Alabama I used to send a copy of the test results directly to the HVAC contractor & occasionally the Building department.  Well as the saying goes, time changes everything as the Alabama HACR board (still get a kick out of that abreviation) requires a copy of the results for each test including ones where a test isn’t needed (starting January 1st 2014). 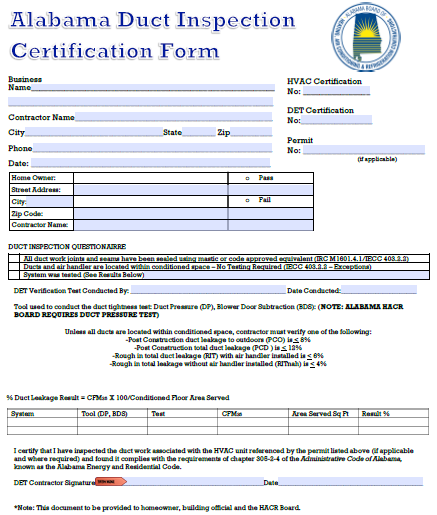 So which form do I use? Well with the exception of doing a HERS rating which I mentioned above, none. I am old school & try not to lock myself into checking columns & tabs. My focus is on what the homeowners concerns are & what I see. With that if I am doing specific HVAC tests I have a sheet similar to the one from Austin. I also carry a copy of the New Jersey one to skim through at the finish to make sure I didn’t miss anything. Does this work for everyone – no, but in those cases hopefully they can use some of the ideas above & create a form that works for them, because nothing can be worse than getting back to the office & realizing, oops I forgot to check… or did I turn the Water Heater back on?