One of the biggest questions out there is which direction should my fan be running and how can I tell. You look at the switch and realize it isn’t any help as they don’t even have an arrow saying which way the fan is blowing or even a simple pictograph showing the sun or a snowflake. You pop open the book and all you might see is something like this on the right. Yeah I know where the switch is, but which side is which?

Maybe your book shows you something like you see now on the left, but that still leaves questions. Is the clockwise position as you look up at the fan or??? Is this a hard & fast rule or are there caveats? How does this work? Will this really save me on my energy bills?

One of the biggest caveats is do you really want a fan blowing on you all night while you sleep, onto a table of food, or maybe even a friendly game of poker? If not then feel free to turn it in reverse (and up the speed as needed) – you will still get some air movement allowing you to feel cooler without cooling down your food or blowing cards around.

While I am not a fan of fans being in the kitchen area I know some people like them; with that be mindful of how the flow affects items on the stove. Not only can this blow flames around on gas stoves but impact how well the exhaust works.

Great rooms / multiple fans: This can be tricky and I recommend experimenting to see what gives you the desired effect. In some cases I have seen all the fans set to run in reverse like many restaurants do (not cool down food – circulate air), while others may have one set forward and another in reverse.

Outdoors: Again this comes down to desired goals, for many of us the outdoors is great except for humidity & bugs. In most cases the summertime position is best even if it cools down the food some as it helps keep you cool (evaporation) & the bugs off you. In other cases (rare – it really depends on the structure you would be under) you might still get the same effect by putting it in winter mode and turning it up as the air flow might be enough to keep the bugs at bay. If you have a smoker or two at an outdoor barbeque, putting it in winter mode would probably be best as it will help draw away the smoke instead of blowing it all around.

Can I really save hundreds on my heating & cooling bill? Yeah, probably not is the short answer. Ok, how about 10% like many claim… While I will grant that is possible in some cases, you have to do a lot of things right to hopefully achieve that. First you need to revisit rule #4 above. 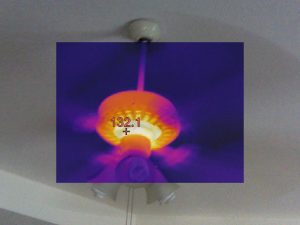 For Summer – as mentioned in 25 ways to keep your cool “Ceiling fans & portable fans are great for spot cooling / moving the air around. There have been numerous studies where people have felt just as comfortable (if not more) when utilizing them even with the AC set a few degrees higher. The catch is it only applies & works if someone is in the room so turn them off when leaving the room” So in this case, only turn the fan on when you are in the room to enjoy the wind chill / evaporative effect. You also need to set your thermostat up a few degrees higher, if you don’t do that the same load still is there and a little bit more as shown in the picture. If you do this and still feel comfortable, then great you will save some watts of energy.

For Winter – unlike summer where we want that feel of air movement, during the winter we want to avoid that “draftiness.” Fortunately ceiling fans can help in that regard by distributing that warmer air to the walls (especially exterior ones) which are generally really cold. Let’s back up half a second here – Have you ever stood in front of a large plate glass window and just felt cold or even like a draft was blowing against you? That is actually your body giving off it’s heat and in the later part creating a convective current. If you can minimize that, then you can probably lower the temperature on the furnace and save some BTU’s. The catch like above is you need to lower the thermostat & also turn the fan off when you won’t be in the room for an extended period – though yes, the heat generated from the motor does aid in keeping the room warm.