You are here: Home / FAQ's, Acronym’s, & Terminology / Electrical FAQ: Off the wall questions…

In some past articles we have talked about swapping out outlets in your house with newer Tamper Resistant ones especially if you wish to child/baby-proof your home or if you wish to give your house a facelift. Last week we also posted a question – just what is wrong with these pictures? If you haven’t seen it yet, why not head over & take a look – maybe even give it a shot. This has led to many questions some of which many people are almost afraid to ask (yes even some pros out there). So lets see if we can solve the issue that had some building inspectors laughing and answer some of those off the wall questions…

Quick few notes: Most code call outs are from the 2018 IRC which is based on the 2017 NEC. Some locals also may have additional requirements so if in doubt always consult with a professional in your area or the local AHJ. If you are a homeowner & have aluminum wiring, older two prong outlets or worse yet knob & tube wiring do not attempt any work without having things checked out. 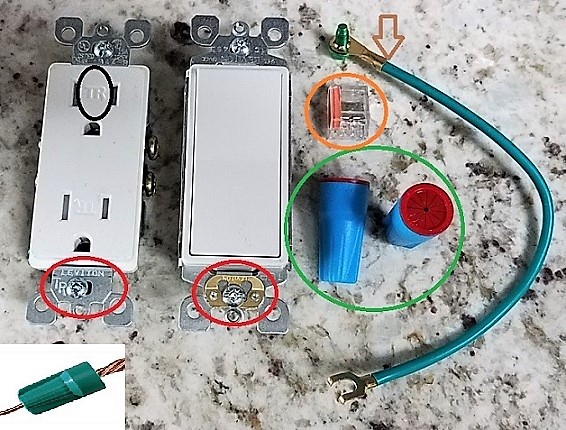 Do I have to use Tamper Resistant outlets?

By code if you do anything, in this case swap out an outlet you need to install the new items based on the newest code. In this case E4002.14 requires tamper resistant outlets unless the outlet is located 5.5′ above the floor, is part of a light / appliance or is a dedicated outlet not easily reached (i.e. refrigerator). Tamper resistant outlets are pretty easy to spot as they have little covers blocking the connectors underneath / have the initials TR on them. See black circle in picture above.

Why are the older types still available?

Partly because there are a few exceptions listed above, but mainly because people still buy them & there is nothing prohibiting there sale. Hey if we don’t sell these cheap ones & only carry the slightly more expensive ones people will go elsewhere to save a dime…. One other reason is some may consider this just a repair / replacement so I should be able to swap with… With that, doing a remodel or deciding you want to replace – do it right & swap.

I hate those outlets they are so hard to plug into

I got to say, the first time plugging stuff in, it can be a major headache – that is one reason why I use an outlet tester on all the plugs. not only does it guarantee everything is fine but allows for the blocking plates to move easier from there on out. With that some plugs are just that much harder to plug in at least the first few times – with that sometimes you just have to hold your tongue just right

How about these new AFCI/GFCI outlets?

GFCI (Ground Fault Circuit Interrupter) outlets have been available for years which were required to be used in kitchens, bathrooms & exterior locations (i.e. any place where water might be an issue). Codes have recently changed requiring certain locations to also be arc-fault (AFCI) protected. This was done originally with breakers but this proved problematic even in new construction so the outlet was introduced. Newer codes require a GFCI / AFCI combo which can be done by combination breaker (say AFCI) with GFCI outlets or you can buy a combo device.

Does every outlet need to have one of these single/combo units? 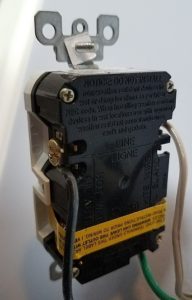 Ok I get that but someone installed a GFCI on every outlet, will that hurt anything?

No it will not but it can make troubleshooting a little harder based on how they wired it. In this case pigtails might be a good option where everything is connected to the Live side not the load.

Do I need a special outlet for outside?

I always forget, which side is hot?

The Bronze (gold color) is for the hot / load wires while silver (which looks closest to white) is neutral.

How can I prevent the wires from coming loose? 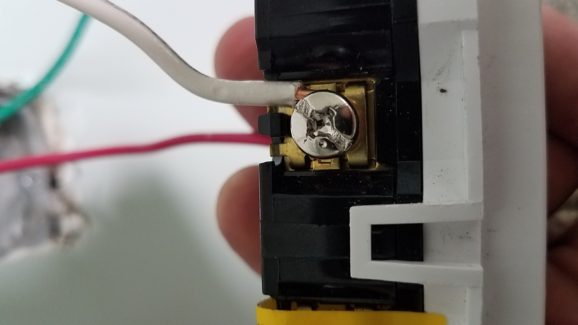 Hold the outlet in the palm of your hand facing up & out based on the terminals you wish to wire. Now hook the wire over the screw as shown (clockwise) & tighten clockwise which pulls the wire tighter & not push it away.

Yes you can unless you have aluminum wiring – those must be wrapped around the screws. One other catch is you need to use the proper sized solid (not stranded) wiring.

Do I need to tape the outlets? 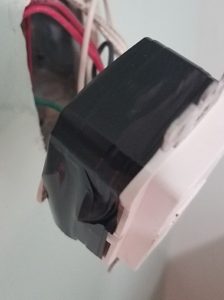 No, that is a fallback to the good old days of older wiring and where electricians would work with live outlets. With that said, it doesn’t hurt, especially if you are say painting a room & are worried about a kid sneaking in & possibly touching the outlets. one other time I can this being a good thing is with some of those large GFCI outlets which are in close proximity to a timer, mud ring (for those of us in conduit country), etc… 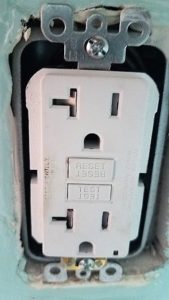 See what I mean about being close to the mud ring – granted once it is in you are fine, but what happens if you need to adjust it – do you really want to run down to the panel &…

What size wire do I need to use?

As a rule of thumb, 14 should always be used for lighting & 12 for outlets. Granted in conduit land you can get by with 14 for outlets but I don’t recommend it.

Which way should the outlet face?

Some say they should always be up & down while others say sideways is better. The sideways crowd says if something falls between the cord & the outlet it will hit the ground and not create an arcing situation… Yeah ok… In all seriousness it can either go up & down or sideways, the codes don’t care. In fact per E4002.16 Receptacle Position the only thing it states is one may not be installed in a face-up position in kitchens or baths unless listed. With that if you do the sideways version – make life easier on everyone & have the ground to the right or at least make sure it is consistent throughout the house.

But how about the up & down option with the ground facing up instead of down?

Just like above, the codes don’t care but there is no real reason to be different especially as most plugged in equipment today doesn’t require the use of the electrical systems ground (i.e. it’s internal)

Can I use metal outlet covers?

Yes you can per E3906.10 but the cover must be grounded to the system which rules out older outlets and wiring. (see grounding conduit for allowed outlet which does this)

Does it matter which way the screws face on the covers? 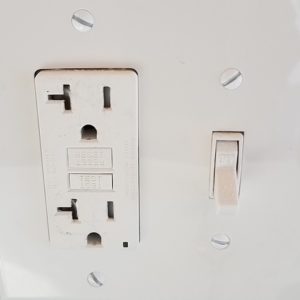 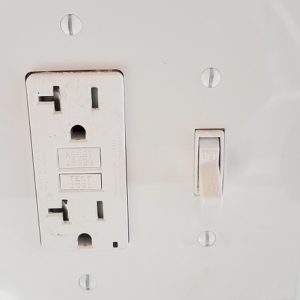 Do I need to pigtail my wires? 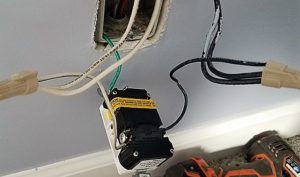 Some electricians like to pigtail all like connections so they only have to attach one neutral, one ground, & one neutral to an outlet as shown on the left. While the codes do not require all this, be aware some locals might.

Now what is required – the “Grounds” must all be connected that run through the box with one wire going to each outlet &/or switch. If you have a multi-wire situation (say where they used a 4 wire Romex wire to feed 2 different circuits & the neutral is shared) then you also need to do a pigtail so that if a device does go out, it doesn’t interrupt the other devices downstream.

Why might I want to pigtail my wires & when shouldn’t I?

Pig-tailing is most often seen in commercial & industrial settings where if there is an issue with one outlet it won’t impact the others. This also allows for them to replace an outlet while not taking down the entire circuit (yeah not recommended but sometimes you got to do what you have to do. 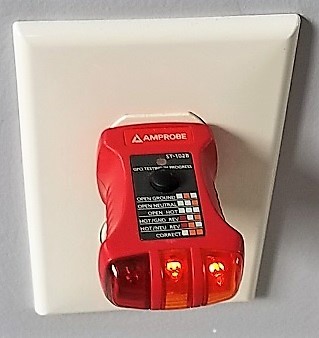 Can I use multi-wire connectors like you have pictured above?

If you notice the orange circle on the main picture you will see a multi-wire connector (in this case 3 though up to 8 is available) which can be used instead of wire-nuts for creating pig-tails. Yes you can use those but make sure you strip the proper amount so it fully seats with none left sticking up.

Pig-tailing Grounds – can’t I just twist, clip all but one & go?

No, you should use a special wirenut – see bottom left corner of main picture – / do a regular pigtail / or a crimp ring to guarantee t hat the wires stay connected for all devices

What is better – Romex or conduit? 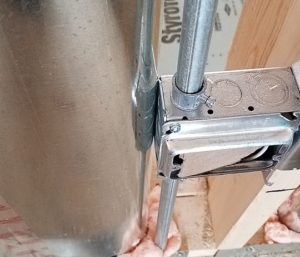 Whichever is properly done… In all seriousness I hear many up here in conduit land say it is the best because everything is grounded. Then I see plenty of times where said conduit is in contact with HVAC ducts or other items & I just shake my head.

I have to say, I am a fan of Romex my a wide mile – less air-leakage paths, easier to insulate, less chances of nicked wires, better grounding, easier to retrofit, less protection plates & the list goes on. The only saving grace for conduit is if it is in place it is easier to replace wires or add another one in.

I have conduit – what is required for grounding? 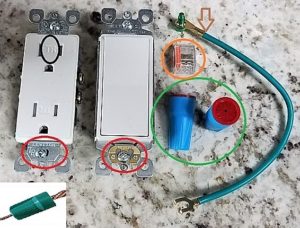 As many know the conduit, metal boxes & mud rings create the grounding system,  so everything touching it is technically grounded but you need specific outlets to guarantee it or use a bonding wire (brown arrow). The red circles show the ground connector on the switch & the outlet without one. In this case the switch is good to go whereas the outlet needs the green wire connected to the box (there is a hole on the back to connect to)

I have aluminum wiring, is there a special outlet I need to do this?

As stated above, have a pro check this things out first but yes you need a CO/ALR or CU/AL or AL/CU rated outlet. Also no backstabbing these, the screws must be attached to the wiring.

Can’t I just use a 6″ pigtail with a copper wire & use a regular outlet?

Yes & no – but if you try this you must apply an antioxidant paste & use a specially designed crimp or wirenut. Quite honestly the price difference is so small I would just choose the proper outlet and not jam anymore wire into the box.

What are those blue wire-nuts circled in green?

Those are special wire-nuts designed for wet / underground locations which are essentially filled with a jelly to prevent water from contacting the wires.