My last week of April & early May was filled up by conferences that included ACI National & a regional EEBA conference on Houses that Work. While the EEBA conference is locked down to one session, trying to choose just one session in each block at ACI was challenging, as there were so many good ones to choose from. Another issue is, just how do you pick & choose what to write about. (A good list of how others tackled this & their takes – Energy Circle)

With that in mind I decided to go with three articles; this one will be on ACI and the sessions not involving “ventilation” aka 62.2. Yep that means the second one will be on ventilation including the renamed “The Ventilation Standard Debate – The Real Housewives of 62.2” which simply became known as the Great Ventilation Debate. The third will be dealing with refurbishing houses, the 1000 home challenge, lessons learned and installing heat pumps in cold climates (trust me it ties together). So with that & with no further ado… 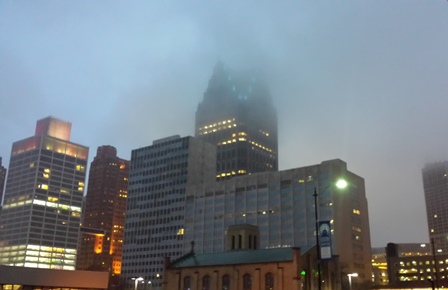 I got to say it is nice seeing Detroit rebounding, but as for a convention location… I would give it a 3 out 5. Oh & no, they can’t make the sign that says this lane to Canada only big enough… got to love GPS. 🙂 As this was my first ACI convention, I couldn’t compare it to prior events but talking with many of the exhibitors this was probably one of their smallest in recent years but still pretty well attended. While they did not release official numbers they did mention that over 500+ companies were represented.

How to become smarter than air:

This 4 hour workshop / class was put on by TruTech Tools & can I just say I gotta get me one of these. This is probably one of the best training tools I have seen which not only can help you understand air turbulence but why your gear can fool you if you drill in the wrong location to get a reading. 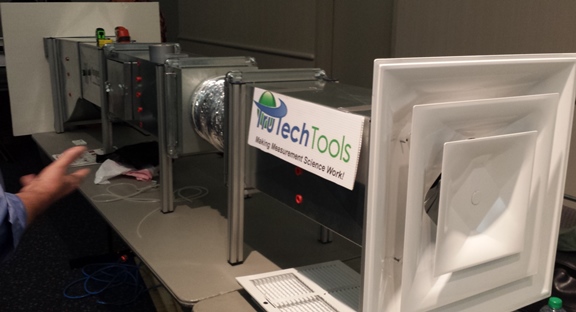 Overall it was a great workshop where we got to play with some of the latest tools. A few key points is be careful thinking an ECM is a cure all as it can cost you big time if your system has restricted airflow issues. I also got to say I like the analogy of flex duct being like a garden hose, it doesn’t take much to mess with the flow. While one would like to think that we are just moving air, we are actually moving pounds – in this case .075 lb’s per cubic foot.

This session was by Sam Rashkin who used to run ENERGY STAR® & now heads the Building America Challenge program (soon to be known as Net Zero Ready Homes.) This could quite easily be a post unto itself, but with that let me leave you with a few quick takeaways.

Going off the deep end? (AKA The Home Performance Translator)

While I applaud their working on cleaning up some terms like what exactly does High Efficiency or Super-Efficient means (15% & 50% better than code respectively) adding in terms that mean nothing I feel will cause more issues than it will ever solve. With that said, if you do want your voice heard – is it a good idea, a bad idea, how could it be improved – make sure you register on the Resource Center so it can be heard.

This was one I simply had to attend as I have known both Peter Troast & Nate Adams for years, but this was the first time I actually got to meet them face to face. Unfortunately for most this was a late evening session & there wasn’t quite enough time to even cover the multitude of questions many had on using Social Media.

Ahh, Michael Blasnick is quite a character, which many hold in great esteem while others simply grate their teeth when they hear his name. Overall, my impression is he is a good guy, definitely smart with some great points but sometimes blinded by his logic /world view (aka target fixation). I would also say the course name is slightly deceptive as it was more about simple math as compared to physics. With that said, a big kudos for him showing & explaining the math he used – while it maybe simpler, it generally ends up with the same & in some cases better results with less hair pulling. 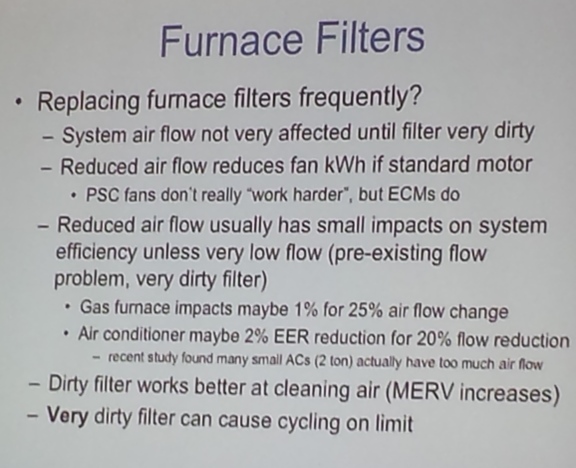 Needless to say I was back for another Sam Rashkin piece & I got to say I think the title was a little off for what was covered as it mainly covered how to use the Resource Center. For those though that think that Challenge Home / Building America is only about new construction the answer is no – they are working hard at integrating studies being conducted since 2009 into the Resource Center.

You got to admit, he knew he won the ventilation debate & was having a blast in the last seminar for the conference. Got to love how he likens OSB to the spam of wood & the best reminder of all – Do not let marketing people teach you Building Science.

Got 12 minutes? Need some good laughs & want some sound building science? Here is a portion of Joe’s talk which covers everything from why he drives a Porsche, crawl spaces, replacing DOE & shock of all shocks I only counted one swear word…