You are here: Home / Training, Education, & Confrence / My Take: ACI & the Ventilation Debate

This is our second of three articles dealing with the ACI conference I attended back in late April. This one is specifically dealing with ventilation, which includes the Great Ventilation Debate which was originally titled; “The Ventilation Standard Debate – The Real Housewives of 62.2.”

As I have stated before – ventilation is needed in all houses, not because houses need to breathe but the humans & pets inside do. I also believe that in most cases the arbitrary numbers of 62.2.10 used are too high, explained the issues in humid climates with running items 24×7, and even how I have dealt with them. Well out comes .13 which almost doubles the amount of ventilation and my jaw hit the floor. Fortunately I consider myself open minded and at ACI they had numerous pieces on the new standards straight from the horses mouth (so to speak) so I did load up on many of these sessions… So with no further ado, my notes & thoughts…

This session was put on by Brennan Less & Ian Walker of LBNL who also is part of the 62.2 committee.

As part of the 62.2 process, & sponsored by some grant money from Building America… a study is underway about adding in temperature-based controls to eliminate ventilation during the coldest part of the year. Why? Well that is because stack effect accompanied by the buildings leakiness allows for “enough ventilation to occur naturally”… Of course as it gets warmer (essentially when most are actually throwing open windows in those areas that this would actually work in) the ventilation system is then needed. 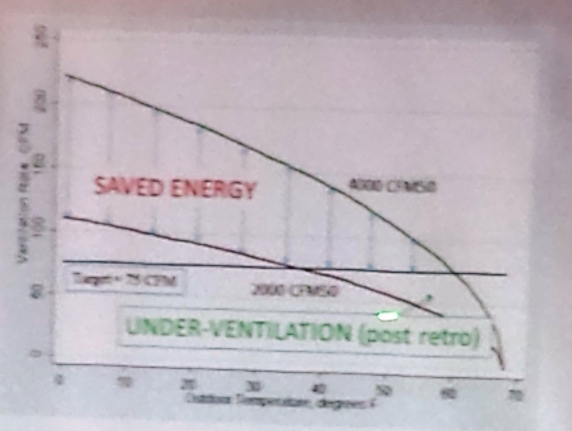 In all reality the entire premise is flawed, the arguments are week & as pointed out by an LBNL study this will do no good for any house that has 5 or less ACH. Interestingly Canada’s HOT system models an HRV as only running during the colder parts of the year & being shut off when most people throw open the windows. Another interesting tidbit is while they opened the session talking about the two extremes (really cold areas like Maine, Vermont, North Dakota and super-hot areas like Las Vegas & Phoenix) as the reason for this study, they never talked about the hotter climates at all.

On the good news front for many, word did get out about the committee adopting a de minimus level in an interim version, which means that if you need less than 15 CFM of ventilation you don’t need to install a system. (Assuming your local Building Official adopts it)

In all regards this was not a debate, but rather a blowout. Joe Lstiburek was essentially pitted against 5 members of 62.2 committee & decimated their arguments. While my friend Allison Bailes (who co-hosted the debate) wrote about it, I got to say we & many others saw things a lot differently (or maybe he is just more diplomatic). I know for example how he alludes to Joe asking to get back onto the committee. Let’s be fair, that was partially said in jest as many had stated they wish he hadn’t left and would like him to come back (partially to avoid the GVD next year in New Orleans). I think Nate Adams had the best review of it I saw & wish someone had taped this, as it was huge.

One of the biggest things I couldn’t help but think was that if these events were recorded & sent to Building Officials before they considered updating their codes, I can’t really see anyone adopting this new standard. From it is “wrong 99% of the time,” being rushed to get it out on time, the science isn’t there this standard should be DOA everywhere & they should stick with .10. With that said we know of two organizations that swallowed it lock stock & barrel and that is BPI & DOE (at least the WAP group which is heavily BPI dominated.)

Based on many of the presentations & talking with other pros;