Late April & early May for me was filled up by conferences that included ACI National & a regional EEBA conference on Houses that Work. One of the sessions I attended at ACI was a shared presentation based on using ductless heat pumps (DHP) in cold climates & the 1000 home challenge. While this may sound like a strange pairing, it really wasn’t. This became even more apparent during EEBA’s daylong session that was filled with pictures of failed buildings emphasizing that no matter if you are building new or have an existing house, it is wise to do your homework & learn from others mistakes.

The first part of the ACI session was on a huge study & project in the Pacific Northwest where their primary heating was electric baseboards. While heat pumps have come a long way & there are units rated to produce heat at 0° or below… they did not make the mistake of thinking that in itself would be enough (please remember these are in older houses). In this study (which includes parts of Montana, Idaho, & mountainous regions in Washington and Oregon) they left the older electric baseboards in place as a secondary heat source which appears to have been a good thing as every single place ended up using them at one point or another. Overall, the program scored big on energy reductions & comfort with only a few exceptions, which based on the pictures were attributable to poor placement & installation of the units.

One of the key points made in the “Houses that work” seminar is that a comprehensive systems & process based approach using sound building science is required. Why? Well as the slide below demonstrates, the more we work on reducing the loads in a house, the more complex it gets. The more complex we get, the more the chances of errors increase which means, we can end up trapping more moisture in areas we don’t want it. To cap it off, the reduced heat loss diminishes the chances that it will ever dry out. 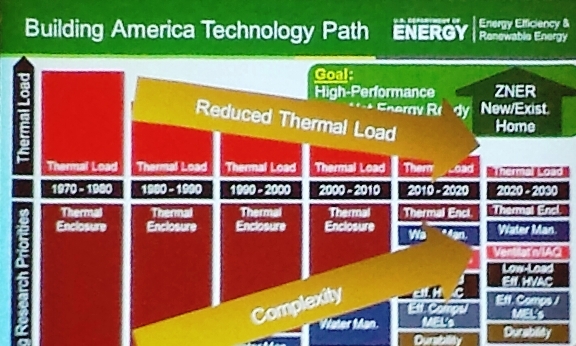 So how do we prevent that?

The first thing to remember is that the whole house is a system so if you change one item, it affects other items. While certain parts might be easily changed out or added like the DHP’s above, you need to know what the limitations are. One of my favorite examples is – you wouldn’t drop a Ferrari engine in a Yugo & expect the car to perform like one, would you? Well the same is true of your house. In order to create a truly high performance house you should consider all the items to get there & in the proper order.

Tying this all together was Linda Wigington who heads up the 1000 Home Challenge which focuses on what many like to refer to as Deep Energy Retrofits (DER). In this case, the goal is to get 1000 or more homes and homeowners to reduce their energy use by 70%. One reason why they have been so successful is they use items like the DHP, they focus on the items above, and they do case studies on what worked & what they could do better. One other reason is they know that very few people can do all that is needed in one fell swoop so they allow for phased or staged approaches. With that, here is her 7 guiding principles based on lessons learned for staged approaches to deep reductions.