You are here: Home / Myth or Misconception / Monday Musings: Paper or Plastic? 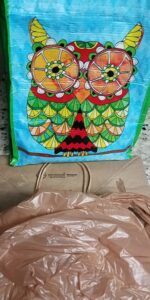 Growing up I remember all the groceries being packed in paper bags. Then a question started to be asked – Paper or Plastic? For a while paper bags still were the favorite but then people started hearing about all the deforestation that was going on & plastic started becoming more popular.

Pretty soon the question was no longer asked and they simply started packing all your groceries in plastic bags (with dirty looks being given if you dared ask for paper in some places). Shoot the grocery stores didn’t care (even if you needed 6 plastic bags instead of the traditional 2 paper ones) as the plastic was so much cheaper & took up much less space.

Fast forward 15 or so years & San Francisco became one of the first cities to ban &/or tax plastic bags for environmental reasons. Bisbee Arizona (2014) flat out banned plastic bags due to environmental concerns (hey you try getting a plastic bag off of a cactus that it is all wrapped around & even worse started to degrade). Numerous other places also stared in but the bag industry wasn’t having any of that and they started pushing for blocks at the state level (Deja Vu?). Bisbee was the unfortunate victim of this as they had to reverse course or they would lose state funding… (so much for grandfathering – 2017 state law)

Fast forward to 2019 & plastic bags now are no longer an environmental evil but fast becoming a new revenue stream as Illinois Gov. Pritzker proposes to help balance the budget with a 5¢ tax imposed on plastic bags.

Which is better: Paper or Plastic?

How’s that go – depending on your point of view you can always find some study or group that agrees with you. The Plastic bag industry (just like every other one) will point to studies that put it in the best light. One 2011 UK study I saw mentioned recently said one would have to reuse a paper bag 4 times to make up for the environmental impact of just one plastic bag. Really?

We have written about Target Fixation before, especially when it comes to items like concrete & even petroleum based products before being slammed / bastardized. In many cases this is what happened here many decades ago – many environmentalists went all those poor trees… plastic is good. Lower emissions to make, less carbon to transport, etc… sure I agree, but how about the rest of the issues like what happens to the product after it is used?

Recyclable – nope for plastic & even if you supposedly have some that is it isn’t welcome in most recycling programs or gets mixed in with items that aren’t so it essentially isn’t recycled. Paper is generally easily recycled along with cardboard, glass & metals – granted I know recycling has taken a hit lately but a lot has to do with plastic bags & other items contaminating the stream.

Reusable – I would dare say the number is probably in the single percentage area for plastic – not only due to the amount everyone gets – sure some people might bring their lunch to work in one, or use it for bathroom trash… Paper – way back when the number was probably in the high double digits as most used to at least use it for trash can liners, not including bringing bulk items elsewhere.

Biodegradable – well while everything degrades over time paper wins out over plastic hands down. Now not only are we hearing about mercury in fish, but also plastic particles in their systems – mmm sounds delicious. Really want to do some reading – try searching for terms like plastic oceans…

Carbon /GHG emissions – really you want to go there? Ok trees absorb it & unless you burn the bags said GHG goes into the ground which many scientists are trying to do via other means. While many like to look at emissions used to create & recycle a material and say X is better, most of those same studies overlook what it takes to get the raw product to the “starting” stage of the life cycle assessment. Sustainable & environmentally friendly – nod really has to go to paper

Hey how about the dyes used on the paper bags… while many are not the greatest that is pretty much a non-issue & I would dare say the ones used for plastic are probably worst. With that many of today’s newer dyes used are much better than yesteryears so as I said a non-issue.

So paper is all good – well no it isn’t but don’t think about jumping on the tree band wagon. Now if everyone was to magically stop using plastic overnight there would be a short term issue but the chances of that happening are non-existent. So why isn’t it all good – well when it comes to transporting items like meat you definitely want to choose plastic. Of course you should already have put it in a plastic bag (yes the ones you find in the meat / produce section) so then paper as the final medium is ok but you still need plastic.

I hate to say this, but not necessarily. First you have 2 main types – plastics & fabric and both have pros & cons. Plastics are nice as they can hold a shape pretty well but they don’t release moisture & allow for mold / mildew to build up & contaminate items placed in them. No I am not going into them being petroleum based but will point out many of the plastic bag issues above also apply to them.

Cotton / fabric on the other hand generally doesn’t hold a shape well (normally) but will allow moisture to escape. The issue though is if it does get wet, especially with meat juices this can allow for nasty bacteria to still grow. Granted you can wash out both & even dry fabric ones but you have to have room for this, storing them & remembering them when you go to a store.

So the verdict is?

The verdict is use your head first & not just jump on the most current bandwagon as many are very short sighted & long term results can come back to haunt you. All said though plastic is not all bad, but it’s use should be limited. While reusable bags do have there place they might not be the best option for you. Do we really need to reduce the 66 plastic bags every person on the earth uses & disposes of each year (latest estimate of 500 billion bags created a year with a population of 7.5 billion) – yes indeed.

Taxing for just the stated purpose of taxing… sure there will be some that change their habits to avoid the tax but that is generally limited. Granted I have seen some that have said Chicago has had 66% reduction (one retailer) but I am sure that one was a cherry picked number. One has to wonder how many are reporting correctly – we double bagged but only said one bag, how many just put down a number – 5  or bags instead of 8 or 15, etc… One also has to wonder how many people said screw it, while I am in Naperville or… I am going to grab my groceries, etc…

Granted this is supposed to be a state wide tax, but you can expect many people close to another state might just do their weekly shopping there, or as I have seen some retailers say, screw it I am going to buy my bags in Indiana… It will be interesting to see how this works out & if it does do any good – I just know the money they think they are going to get, there not. So are they going to hire enforcement agents or just say you have to buy all your bags from XYZ, well we shall see.

Along those lines, I have to say I find it funny that for a party dedicated to making the rich pay… that items like this, the obligatory smoking ones, etc… mainly only affect… Just saying & with that we would love to hear your thoughts, though we ask that you keep it civil & leave it around the actual subject – Paper or Plastic?

My Take: Lessons to take away about #TheDress
The truth, the whole truth, and nothing but the truth…
FAQ: Do I need to change my HVAC filter monthly?
A Guest Rebuttal? Not Dead Yet! Saving the Pot Light
RIP: Recessed Lights Part Deuce
RIP: The Garbage Disposal Unit
BS4D: But my house needs to breathe…
Granite - Maintenance, Upkeep and a Geiger Counter?
Featured Posts