You are here: Home / Wordless Wednesday / Wacky Weds: Got a shoehorn handy

In auto mechanics many gripe about the engine being built around the part you need to remove… but in a house?

Yep the water heater is not only jammed tight against the return duct, but the water meter sticks out in front of it by about an inch. The Gas line doesn’t run straight up & down but is rather resting against the water heater & pushed out by a few degrees because there are water lines behind the heater not allowing for it to be pushed back any. 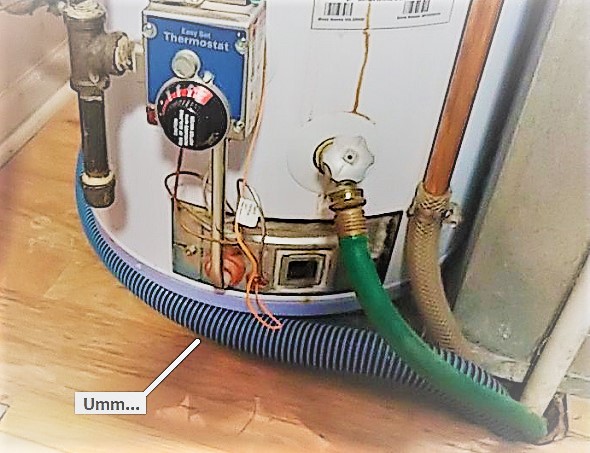 Another image to make one go hmmm… Yes it is a gas fired appliance but they wrapped a plastic drain line right around it. In most cases this isn’t an issue, but definitely not recommended.

You know what the real issue is – yep replacing it. Not only do you have the issue of getting it out but you will also have real issues trying to replace it. The only one you can find one now that is that narrow, is going with a smaller unit. Yep, we warned about that before – DOE changes minimum efficiency. To bad the builder didn’t allow for the proper clearances. As for other options, well look for an upcoming piece.