The guy I have installing my vinyl siding just placed the foam over the old “Tyvek”, is that ok or should he have removed it first? The house has tar paper &/or XYZ on it, can I just go over it / will that cause moisture issues? I had a few delays and am now ready to install my siding, is the wrap I installed X months ago still good or do I have to remove and replace it? I just saw someone installing Tyvek over the Zip System doesn’t that create a moisture issue…

One of the most popular questions revolves around “my installer just installed the foam over the old “Tyvek”” – should it have been removed, replaced &/or will it create an a moisture sandwich? Many manufacturers are mute on this point though many will state after ensuring the sheathing is in good condition…

As a best practice it should be removed to ensure there is no moisture damage to the sheathing or wall assembly. Does it really need to be, no not really. With that said, the old “Tyvek” is no longer the primary air or moisture barrier so the foam needs to be detailed right to handle those aspects – all the seams taped, cap nails used, etc… basically per the manufacturers guidelines. Don’t forget that this also where all the flashings need to be tied into. 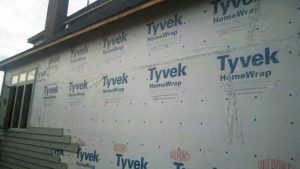 Should it be replaced – it doesn’t really need to be but seeing most “foam” installs and knowing how foam can expand & contract – I would replace it on my own house and I would forgo using that fan-fold foam altogether. But what about the R1 rating or other benefits touted – well if it is installed properly, it may help cut down on air leakage  give you a little more insulation though I have issues buying the R1 number due to its thickness, creases & grooves. If you really want to insulate, do it right as listed in the article in the prior paragraph.

So what is a moisture sandwich? It is essentially where you put two impermeable materials (technically *Vapor Barriers like Plastic) in a wall or roof assembly that essentially traps the moisture between them thus leading to rot & other issues. When it gets to tar paper, Tyvek, etc… these items are not impermeable (aka *Vapor Retarders) as they allow vapor to flow through them. (*We will discuss this more in another piece on “perms”) So having two layers of Tyvek or where you place Tyvek over tar paper is allowable / should not cause issues. 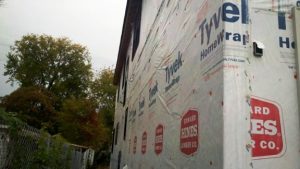 Still not convinced… Well if this was really an issue, do you think the manufacturers would specify that you overlap the edges (like is shown in this picture) instead of just taping where the two piece meet?

*Vapor Retarder versus Barrier – A barrier technically blocks the flow of moisture while a retarder allows vapor (not water) to flow through it (the higher the perm rating the more moisture.) Unfortunately the term barrier has become so generic now that many simply refer to both products as “barriers” (yes even I am guilty of doing that.)

We have already established that there is no issues with moisture sandwiches, what about using Tyvek over a different item like Tar Paper? As long as the tar paper is in real good shape, in most cases you would be fine, as long as neither product gets wet. Ahh but what happens when they do get wet – well then you can have an issue with surfactants &/or tannins. A surfactant is essentially any substance that reduces the surface tension of a material which reduces it’s overall resistance to moisture. In simpler terms, have you ever touched the inside of a tent when it is raining, congrats you now have a leak.

A tannin is plant based & besides the obvious wine related items, it essentially is a product released from a material like cedar & is a surfactant. Ahh but what does this have to do with tar paper, well it can still have some on the surface… As stated as long as things stay dry you probably won’t have any issues but just like above, you should remove it to make sure you don’t have any sheathing issues.

Cedar is a great material but it can cause issues with many products including tar paper. Tar Paper will generally not show it as readily due to it’s thickness but it can break down. While you may consider a product like Typar (higher surfactant resistance) there are a few other options which you might want to consider. The first is follow the manufacturer’s directions (Tyvek) which generally state that cedar needs to be sealed on all 6 sides before installing. The other option which is preferred is to create a rain screed detail so it never touches the WRB.

How old is to old?

The XYZ and it looks great / good shape, but it was installed over 6 months ago… This is pretty easy, for almost every product the answer is to remove & replace. Why? Well besides the surfactant issue there is a much bigger one & that is the sun, well the UV rays to be exact. The UV rays simply degrade the material reducing it’s ability to perform. How long is to long, well you would have to check with the manufacturer to find out when it needs to be replaced especially as many manufacturers are always improving their products.

Is it overkill, a smart idea, or…  Well a few years back we mentioned this as a belt & suspenders approach due to the little amount of time it had been on the market. We still stand by our comment that if you want to do this you should use a product like HydroGap (or better yet go with a rain screen detail) but just using a product like Tyvek is unnecessary if the product is installed properly. How about the roof though – that I would still recommend going over it with tar paper or synthetic product like Titanium UDL.

FAQ: Do I need to change my HVAC filter monthly?
BS4D: ACH (Air Changes per Hour)
BS4D: Stack Effect
BS4D: The HERS Index & Score
LEAD FAQ’s – To Test or Not to Test – that is the question
BS4D: Heat & Transfer Methods
FAQ: Why are my windows / walls wet or have ice on them?
Who & what is NARI and this Code of Ethics you mention?
Tweet