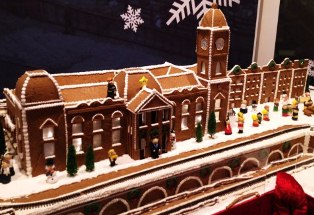 In keeping with tradition (2009 / 2010 / 2011) here are a few of our favorite parodies, light displays, etc… With that and no further ado, from my family and all of us SLS Construction / AlaGBS, we would like to wish everyone a very Merry Christmas, a Bountiful New Year.

This year’s Best Gingerbread build goes to MoMo & Coco bloggers for their coverage of the Christmas with “Gingerbread Village by Epicure” Exhibition.

The Energy Nerd & his take on Dr Seuss

Every Who
Down in Who-ville
Loves the Energy Fair
When Whos get together
To vie and compare
Their energy use — their utility charges —
To see whose is smaller, Milton’s or Marge’s.
To win the grand prize (a bouquet of flowers)
A Who has to limit his kilowatt hours.

The Grinch who resided just north of the valley,
Burned tank-loads of gas — What an energy tally!
The Grinch hated saving! He shouted, “Who cares!
Global warming is good! I hate Energy Fairs!”
He hated the contest; he hated the season!
Now, please don’t ask why. No one quite knows the reason.

It could be that his head wasn’t screwed on quite right.
It could be, perhaps, that his shoes were too tight… MORE

Twas the night before the energy budget was due,
And the portfolio of facilities was all askew.
Utility Bills were spread all over place with confusion,
In hopes that excel would soon give a solution.

The numbers were entered, not a one misread
As visions of weather normalized baslines danced in my head.
I hit the button to compute and the screen just flashed;
I watched as my report disappeared and the computer crashed.
When from the energy community there arose such a clatter,
I opened my browser to see what was the matter.
Away to Noesis Energy I flew like a flash,
Created a free account and dove in with a splash… MORE

The BEST Parody of the Year:

From one of my favorite Australians “BillyPuss” a mikeroweWORKS supporter

It’s that time of year, for Christmas cheer,
And what a year it’s been!
Great things from Mike and mrW,
And from the foundation we’ve seen.A brand new show, for Mike Rowe,
How Booze Built America was gold.
Last Man Standing, left us laughing,
Another sitcom for Mike, who knows?DJDU, oh yeah, woo hoo!!
Mike even sang us a roadkill tune.
Coober Pedy, snakes and toads,
The outback with all those flies too.Scholarships he gave, mrW I praise,
Over a million dollars was raised!
Helping apprentices reach their goal,
And help many attend SkillsUSA… MORE

Best why “Architects should not design Christmas Cards”:

Bob Borson of Life of an Architect

Best when one tree isn’t enough:

RMD Designs & the 7 trees of Christmas

Best “Capture the Spirit” Picture of the Year:

Not only does this show off this company’s amazing work, but catches the spirit of the Holiday better than I could ever put in words… Amy Good of Lancaster County Timber Frames

Let’s Blog Off: Thanksgiving Leftover’s
Thanksgiving: Getting ready in a rush?
Merry XMas & a Prosperous New Year to All
Ten Tips to quickly and safely install Christmas Lights
November – Monthly Home Maintenance Checklist
Happy Holidays to all and to all a little festive cheer...
December and the Winter Holiday Maintenance Checklist
Independence Day Safety - Fireworks
Tweet