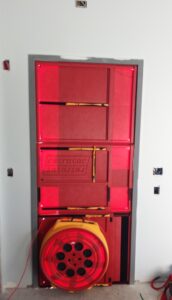 Uh oh – your on the home stretch, trying to knock out this project so you can move onto another one & bam, you failed the blower door test. Unlike a normal failed inspection where you need to fix one or maybe more items that are clearly spelled out, you are now stuck trying to figure out where & why did this happen, so you can figure out the how, as in how do I fix this? While this is generally rare, it does happen – so what can you do? 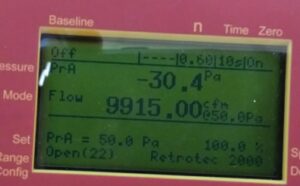 In this case the settings were correct and were within 10 CFM on the other manometer. While we planned on doing a Multi-Point test, at this moment it was meaningless as they were over twice the allowed leakage.

Run through the Blower Door Testing Checklist for Builders to make sure things are how they are supposed to be. Some of the biggest items found are:

In this case someone had opened up the outside mechanical room door but fixing that only brought us down to 7890 CFM or 9.9 ACH. A long ways still to go to reach the 5 ACH we needed for codes at that time. (It is now 4 in Illinois & 3 throughout most of the country based) We searched with Infrared but due to the construction of this building & similar temperatures nothing showed up. The builder had a few ideas but that required a call to the architect & a few other trades so we wrapped it up.

The picture at the top shows one issue, especially here in Illinois where conduit is required even for residential – the outlets hadn’t been installed & of course the covers were off. Topping that off is conduit is nothing but a raceway for air, so unless you seal up the holes (especially on the outside) air is going to get in. 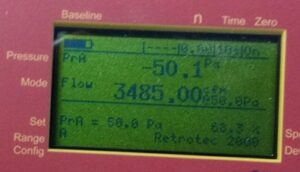 The architect (and some could say builder) failed to do a redline test which had left 4 vents in the raised floor area connected directly to the outside. Oops & then one of the trades had also left an access hatch that no one could see open above the dropped ceiling.

Fortunately while the fix did take time (yes they also made sure everything was finished in place for the second test – outlets, covers, etc…) they finished the project off on time because they had called in early enough (as soon as it was ready for a test). They might have even passed originally if the two issues noted at the end were caught earlier; one before the tiles went up & the other back at design or at least during install (the earlier something is caught, the cheaper it is to fix).